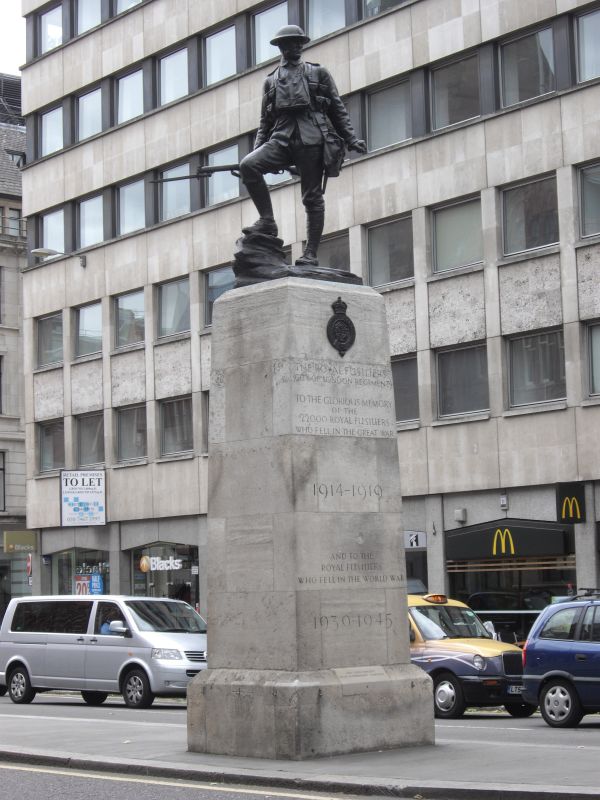 War memorial. Erected 1922, after the First World War, to the design of the architects Cheadle and Harding and sculptor Albert Toft. Bronze cast by A B Burton at the Thames Ditton Foundry, London. Further inscriptions added after the Second World War.

War memorial. Erected 1922, after the First World War, to the design of the architects Cheadle and Harding and sculptor Albert Toft. Bronze cast by A B Burton at the Thames Ditton Foundry, London. Further inscriptions added after the Second World War.

DESCRIPTION: the war memorial stands on a traffic island on High Holborn near the corner with Brooke Street. It is broadly adjacent to The Staple Inn and Prudential Assurance Building. The memorial comprises a 2.6m high bronze statue surmounting a 5m high tapered Portland Stone pedestal and chamfered base. The statue is a private infantry soldier of the Royal Fusiliers in full service dress; boots, puttee, uniform, knapsack, ammunition pouches, backpack and helmet, carrying a rifle with a fixed bayonet behind him in his right hand. He stands with his head turned and his right leg raised on a rock, as having climbed to a vantage point to scan the horizon. His left hand is clenched in a fist in front of him and he faces directly along the road to the west to guard the entrance to the City of London. On the front (west) side of the pedestal is the regimental badge: a Tudor rose enclosed by the Garter bearing the motto: HONI SOIT QUI MAL Y PENSE ('shame on him with evil thoughts'), surmounted by a King’s crown.
Beneath the badge is the inscription: THE ROYAL FUSILIERS/ (CITY OF LONDON REGIMENT)/ TO THE GLORIOUS MEMORY/ OF THE/ 22,000 ROYAL FUSILIERS/ WHO FELL IN THE GREAT WAR/ 1914-1919/ AND TO THE ROYAL FUSILIERS/ WHO FELL IN THE WORLD WAR/ 1939-1945/. On the chamfered top of the base is a stone block, inserted at a later date, inscribed in small lettering: AND THOSE FUSILIERS/ KILLED IN SUBSEQUENT CAMPAIGNS. The rear (east) side of the pedestal has a bronze plaque bearing a list of the 53 regular, service, and territorial battalions of the regiment that served in the First World War. The base of the statue is inscribed: ALBERT TOFT Sc. On the base are stainless steel hooks for wreaths.

The Royal Fusiliers War Memorial was erected in 1922 in memory of the 21,941 Royal Fusiliers who died during the First World War. This included those men of the 45th and 46th Battalions that lost their lives in 1919 during the North Russia Intervention. It also stands as a memorial to fusiliers that fell during the Second World War and subsequent conflicts.

The Royal Fusiliers originated from two companies of guards at the Tower of London. Following the reorganisation of the army in 1881, they were also known as the City of London Regiment. The regiment served in numerous conflicts, including: the Napoleonic Wars, the Crimean War, Second Boer War, the First World War and the Second World War. In 1968 it was amalgamated with the Royal Northumberland Fusiliers, the Royal Warwickshire Fusiliers and the Lancashire Fusiliers to form a larger regiment called the Royal Regiment of Fusiliers.

A permanent memorial to the regiment was considered in June 1919 by senior officers. The initial intention was to erect the memorial in a royal park but this subsequently changed to the Hounslow Barracks; the home of the Depot of the Royal Fusiliers. The memorial was to be in addition to a Roll of Honour in the Guildhall and a brass memorial in the garrison church of St. Paul, Hounslow. A subscription list to gather funds of £3000 for the memorial closed in August 1920. In 1921 after further deliberation the Corporation of the City of London were approached for a suitable location within the Square Mile. Major-General Sir Geoffrey Barton, Colonel of the Regiment, wrote to the Lord Mayor, requesting a ‘conspicuous site….to commemorate the sacrifice of those who gave their lives for King and Country, to bring home to the public the great services rendered by the City during the War, and as an incentive for citizens of all times to patriotism and national duty’. It was accepted and one of the entry points to the city was chosen; Holborn Bars.

The architects for the memorial were Cheadle and Harding whilst the designer and sculptor of the bronze work was Albert Toft (1862-1949). He was a prominent figure of the ‘New Sculpture’ movement: the late-C19 renaissance in British sculpture which rejected the stylised neo-classicism of conventional figure sculpture in favour of naturalistic, often allegorical, forms. Toft exhibited several works at the Royal Academy, and designed monuments to Queen Victoria and Edward VII. Having undertaken sculptural work for several British Boer War memorials, most notably the Welsh national memorial at Cardiff, Toft was commissioned for a number of First World War memorials including the statuary at the Birmingham Hall of Memory (Grade I-listed), and in collaboration with Taylor and Simister, the war memorial at Chadderton (Grade II-listed), a neighbouring local authority to Oldham. The bronze figure for the Royal Fusiliers War Memorial was cast by A B Burton at the Thames Ditton Foundry. It is thought to have been modelled on Sergeant Cox, a Royal Fusilier who fought during the First World War. A version of the bronze figure is included on the Oldham War Memorial (unveiled 1923, Grade II*-listed) and on the memorial to the 41st Division at Flers on the Somme, France (unveiled 1932). A number of Toft’s war memorials are listed.

The Royal Fusiliers War Memorial was unveiled in a ceremony attended by the Lord Mayor of London and Bishop of London on Saturday 4th November 1922. Further inscriptions were added after the Second World War. The church of St Sepulchre-without-Newgate, just over 600m ESE of the memorial, was selected as the regimental chapel in 1946. Conservation work was carried out to the memorial in 2003, including renewal of the inscriptions, steam cleaning and colour restoration to the bronze work, and cleaning of the stonework.

The Royal Fusiliers War Memorial, erected in 1922 at Holborn, London, is listed at Grade II* for the following principal reasons:

* Architectural interest: for the finely-crafted bronze figure of a private infantry soldier in full service dress with rifle and backpack, poised to resolutely guard the entrance to the City of London;

* Sculptor: as a memorial by Albert Toft, a prominent figure of New Sculpture and designer of monuments to Queen Victoria and Edward VII, who was a leading sculptor of bronzework on war memorials with many listed examples to his name;

* Historic interest: as a poignant reminder of the considerable sacrifice made by the Royal Fusiliers during the First World War, Second World War and subsequent conflicts;