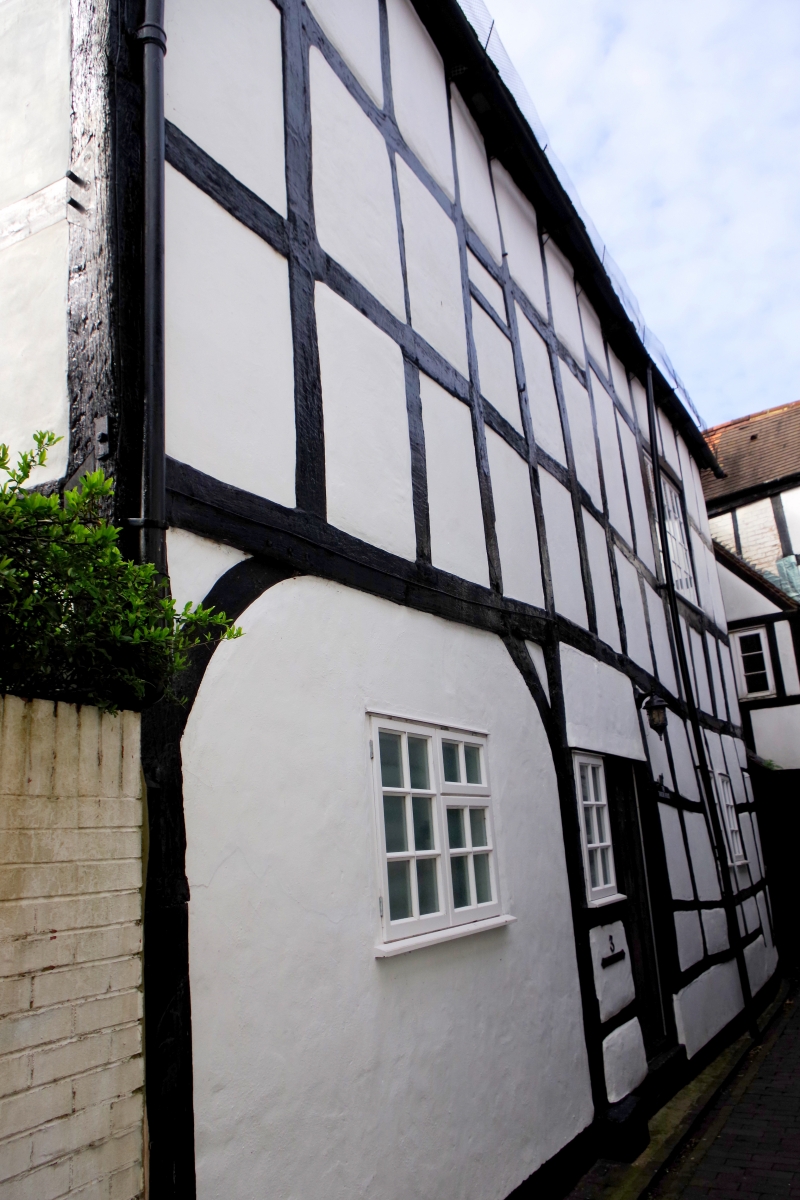 Includes: No.3 WALLS COURT.
House in row, with shop. Early C16 with C17 rear wing;
refronted C18. Rendered front, timber-frame with plaster
panels, tile roof, brick stacks. The property covers Walls
Court, to the left, and continues in a long wing facing the
Court (No.3, Walls Court), but also has fenestration on the
far side, facing the adjoining No.131 (qv). 3-room right-angle
plan with a rear attic room extending over property to rear.
3 storeys, 2-windowed. 9-pane over 12-pane sashes with stone
cills, above a full-width late C19 shop front in 3 bays,
incorporating the entrance to Walls Court. The display front
has two 2-pane windows under very flat 4-centred heads, on
moulded cills to a stall riser, and flanking a set-back
part-glazed C19 door.
The throughway opening is similarly detailed, and the whole
has thin pilasters and a deep fascia with moulded cornice
between raking consoles. The main front has a parapet with
concrete coping. To the right is a lofty ridge stack. About
1.5m back from the street front in the throughway is a fine
Tudor doorway with 4-centred head and carved spandrels to a
very large moulded frame (left), but built-in to the
partition, right. There are 3 further heavy chamfered beams to
posts, and heavy framing to the left, with lesser framing to
the right, with an early plank door.
The framed wing has various replacement casements towards the
court; in the gable is a small 2-light casement above a large
3-light, and one in the underbuild to a former jetty. On the
far side, facing No.131, are 3 gabled dormers and various
lights in good square-panel framing.
INTERIOR: extensively altered mid C20. Details include a
possible C16 arched-braced 3-bay roof to the front, obscured
by boxing-in; on the second floor a C17 three-plank door in
the left-hand wall has strap hinges; the ground floor has a
side door with a fragment of C17 plaster ceiling above, and
the basement has lateral beams and wide joists all with
stopped chamfers and a large commercial bread oven. The rear
attic room, reached by a C17 timber winder stair which has
early C17 cockshead hinges to a cupboard beneath, has cambered
collars, clasped purlins and tie beams on jowl posts.
No.3 Walls Court listed 27.7.73.