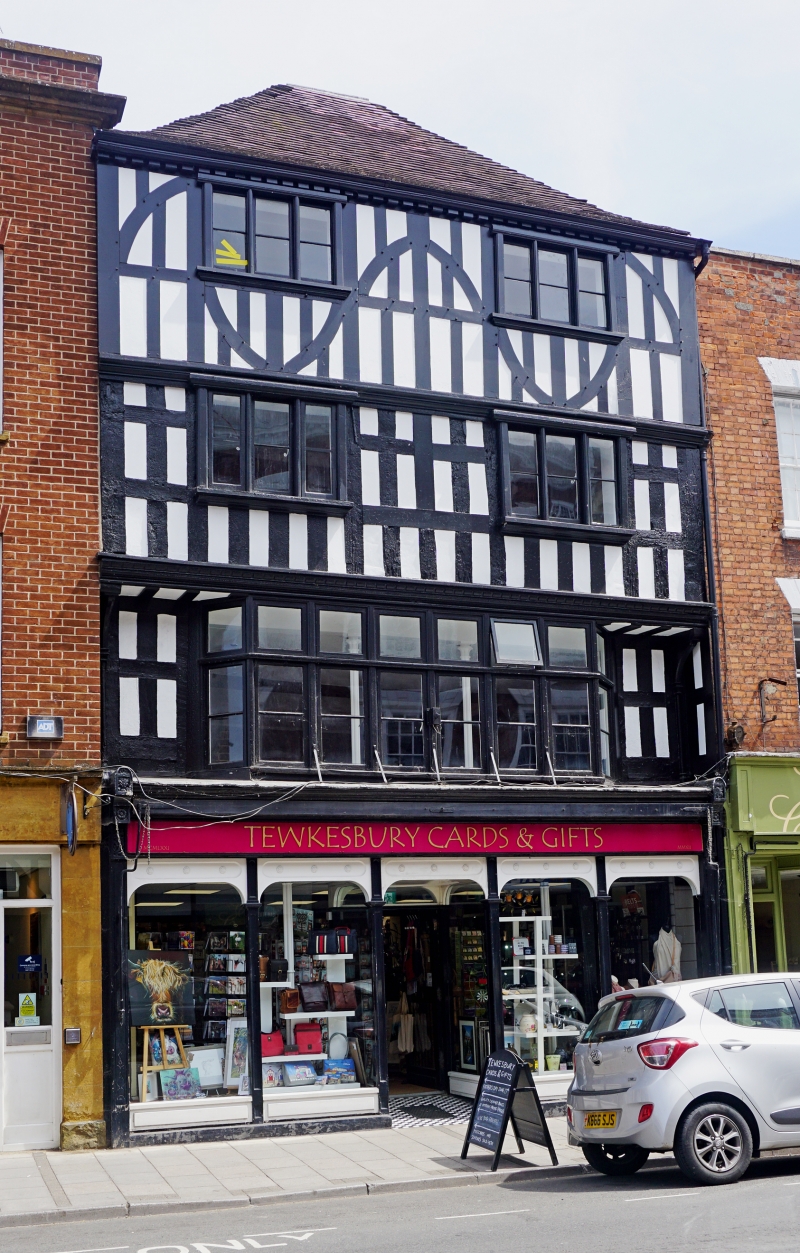 House in row, with shop. C16, raised late C17 (VCH).
Timber-frame with plaster panels, tile roof, brick stacks.
PLAN: A treble-jettied, hipped range, double-depth right-angle
plan with stair and chimney breast at party wall, left, back.
The top floor has slightly different framing from the
remainder; it is said to be a replacement of a former
cock-loft.
EXTERIOR: 4 storeys and basement, 2-windowed. Second and third
floors have 3-light casements with a horizontal bar in
slightly raised moulded mullions and frame, including cill.
First floor, under a moulded bressumer with brattished top,
has a wide 1:6:1-light canted oriel with transom. Ground floor
has a full-width 5-light shop front including recessed central
door, with pilasters and consoles, to plain fascia and moulded
cornice with decorative cast-iron cresting. The upper floors
have close stud and mid-rail framing, and the top floor
includes decorative serpentine bracing. Dentil eaves and
concealed gutter.
INTERIOR: the ground floor has been opened up, including a
large rear extension, but the party walls have heavy stud
framing, and, to the right, one very large brace is exposed.
There are regular large haunched posts with chamfered beams,
and inside the under-built shop front is a heavy bressumer on
a post with decorative jetty-bracket to the right (that to the
left is concealed by later fittings). At the back, left, is a
wooden stair to the probably C16 cellar, which has stone in
the party walls and the main rear wall.
The front wall has a long adit, up 2 stone steps, to a
pavement access, and the right party wall has arched brick
bins, covering flat pointed arches in brick to the inner wall.
Central large chamfered beam. The chimney stack, in the back
left corner, is carried on a corbelled flat squinch.
The staircase rises in a heavily framed compartment through 3
floors, but crosses to the opposite side for the top floor. It
is a C17 dogleg design with twisted balusters, square newels,
and a solid moulded string, all in polished oak. The
first-floor front is a fully panelled room, some original C17,
including the frieze, and some of late C19. The fireplace is
in the back left corner. There is one broad chamfered and
stopped beam on panelled posts. The wide floor-boards remain,
and 2 slender 'Batty Langley' cast-iron columns have been
inserted in the oriel window.
At the second floor is a cut-down door with 6 linen-fold
panels in early framing. The diagonal fireplace has an C18
surround with pulvinated frieze and moulded mantel; the inset
includes a series of 'Delft' tiles. There are close-spaced
chamfered beams on haunched posts, and the party wall to the
left has close-stud framing at the front, with square panel
framing for the major part.
The third floor is open to the roof, which retains framing
from the original building, to which the hipped unit has been
added, on one purlin. There is a propped central beam, the
purlin to the original roof, and an access hatch at the ridge.
The framing of the original gables is exposed, with a blocked
2-light casement on the N side, and a small light to the S,
overlooking adjoining roofs.
A fine C16 merchant's house; the position of the staircase,
characteristic of mid and later C17 town house plans elsewhere
(the Llandoger Trow in Bristol for example), suggests that the
interior was replanned during the late C17 remodelling.
(Buildings of England: Verey D: Gloucestershire: The Vale and
the Forest of Dean: London: 1970-: 376; Victoria County
History: Gloucestershire: London: 1968-: 130).