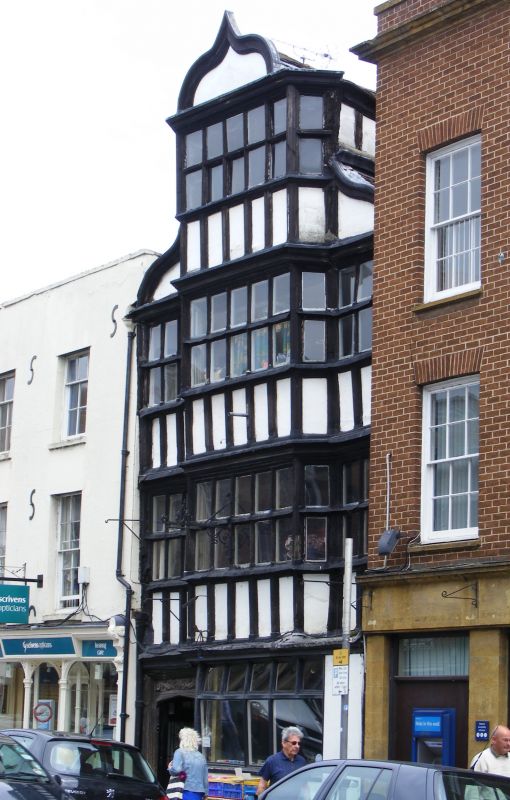 Formerly known as: No.132 Wheatsheaf Inn HIGH STREET.
House in row, with shops, formerly the Wheatsheaf Inn. Early
C16, refronted mid-C17, with C18 extension; over the door
lintel the initials J.V. may be for John Underhill (d 1719).
Timber-frame with plaster panels, close-studded to front;
brickwork, tile roofs, brick stacks.
PLAN: A 4-storey narrow frontage property with decorative
central gable, on 3 jettied stages, with side-entry to
throughway and long 2-storey back wing, including a later
extension or separate property. Frontage block of
double-depth, single-room width plan with central stack
towards right-hand party wall.
EXTERIOR: street front, in 4 storeys with basement, has a
canted bay with mullioned and transomd casements in
1:5:1-lights; at first and second floors this is continued
full-width with 3-light casements. All the lights are small
near-square, with plain glass. The ogee-shaped gable has ogee
side wings, and all the framing and window members have sunk
ovolo-mould edges.
Ground floor has a 3-pane C19 shop front with 5-pane
overlight, and on a stall riser; a blank panel to right, and
to left, probably brought forward from its original location,
a heavy moulded and stopped door frame with flat 4-centred
head, decorative frieze and moulded cornice, on a pair of
glazed doors. The gable has returned sides with framing, and
there is a small brick stack on the front slope, left. The
throughway has remains of framing including a heavy haunched
post set back from the doorway, and showing the earlier
position of front wall, with a jetty over.
Doors lead from passage to shop and to rear wing, which
includes various casements, including a large one at ground
floor. The rear section is in brickwork with tiled roof to a
central valley and twin hipped ends.
In the end wall is a casement under segmental head under the
valley, and a further narrow light to ground floor; the party
wall has a wide casement to a segmental head at first floor. A
cropped brick stack in the rear slope of the front building.
INTERIOR: shop retains 2 walls of C17 panelling, and 2
chamfered beams; fireplace is concealed. To left a lobby gives
to a tight wood spiral staircase with continuous circular
newel, and separate stair descends to basement, which has
stone flank walls at front, concrete floor and chamfered
beams. Back section has brick floor and walls.
At ground floor a 6-panelled door (from Stafford), leads to
lofty rear room with series of beams on heavy posts. At front
a large brick fireplace with brick hood. Beyond a further
lofty room with series of very heavy close-set stopped-chamfer
beams, which carry across the side passage, but with separate
stops. Also a large reconstructed brick fireplace, with,
adjoining party wall, evidence for a former tight spiral
stair. In rear wall, set high, a narrow 12-pane light.
First-floor front parlour has 4-compartment ceiling with
chamfered beams, and brick chimney breast, with remains of
early painting on the return; to right a built-in cupboard
fronted with C17 panelling and doors, with grille above. The
square-framed party walls have important remains of early C17
fresco painting, now covered; 3 panels have painted
trompe-l'oeuil panelling.
Very large jetty posts set in from front wall, and at rear of
room an arched early C19 window with Gothick head; this was
brought from a demolished property in Thornbury. Middle room
includes large structural posts, and a length of C16 moulded
beam. Rear unit is subdivided, but there is a longitudinal
plaster moulded beam under the central valley.
At second-floor level the staircase divides, and there are
separate stairs to attic rooms. Front parlour includes heavy
braced tie beams, cupboard by chimney breast with C17 doors,
early 3-plank door, and small C19 grate in the front corner.
This, with other rooms, has very wide early boards.
Central room at second floor has plastered ceiling with
plaster moulded beams to centre and all edges. Large casement
to the throughway.
Front attic has early roofing, including short king or crown
post to high collar (obscured); a separate narrow room or
store to lower slope beyond the raised gable, on S side. The
attic to rear wing, with separate stair, includes an internal
partition with boarding, and the floors, reputedly for mustard
seed storage, were formerly covered with lime mortar.
An exceptionally fine merchant's house, particularly notable
for its magnificent C17 frontage and interior decorative
schemes which would repay further investigation.