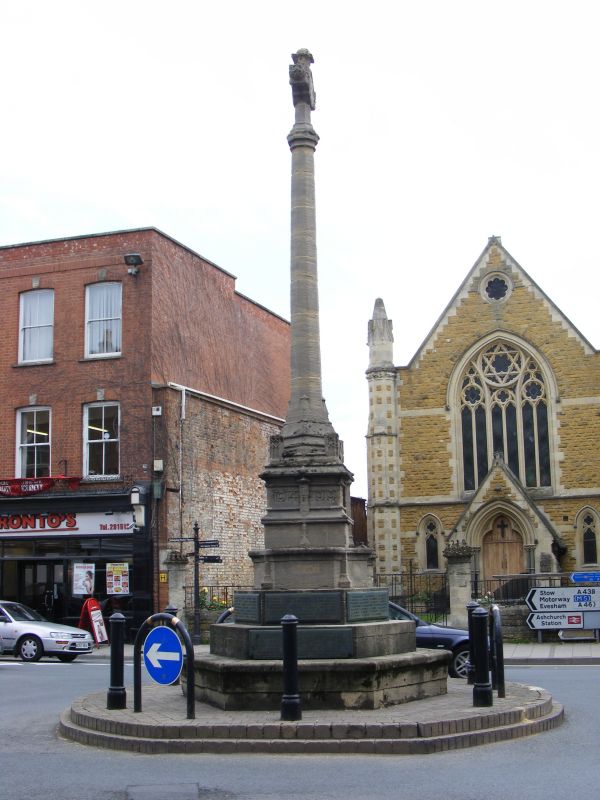 War memorial. c1920. Limestone. A tapered octagonal shaft with
moulded capital and a cross, on an octagonal plinth cut
through by a square base with diagonal buttresses at centres
of the sides, carrying 4 pinnacles. All set on a broad 3-step
hexagonal base, the lowest step with nosing, on a final
hexagonal platform which has been rounded, and protected by 6
stone bollards. The cross carries a central shield of arms,
and the base has a series of 6 bronze plates with the names of
the fallen inscribed, dated 1914-1919 (sic). A further plate
has been added covering the years 1939-1945.
The memorial is at the meeting of the town's three main
streets, previously occupied by a medieval cross, demolished
in 1650, and later by a market hall: Dyde (1798) notes that on
the spot "..... there was until recently a Tolsey or Town Hall
.... very old and of mean appearance", which was said to be in
the way of traffic. The new Town Hall (qv) in High Street
replaced this former building in 1788.
(Dyde W: History and Antiquities of Tewkesbury: Tewkesbury:
1790-).