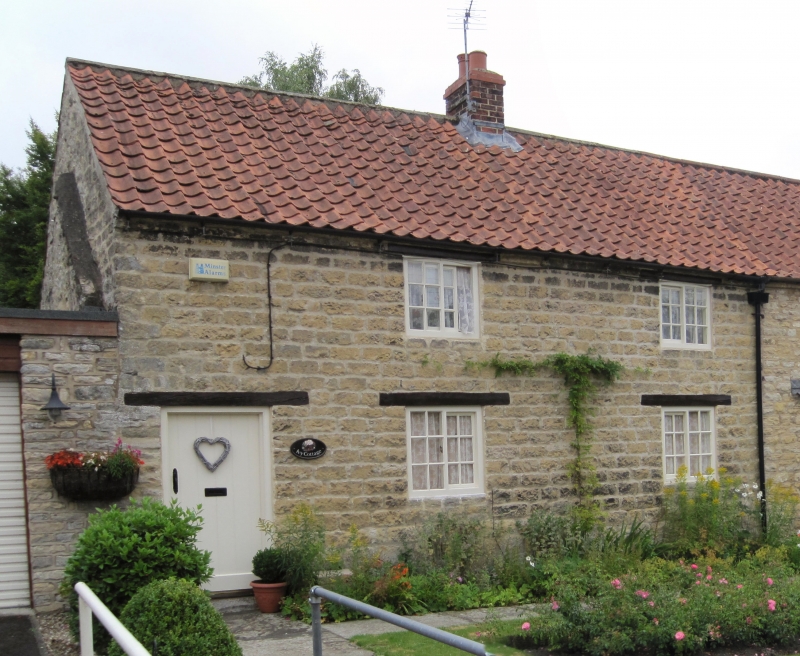 PLAN
Early-C18 cottage, two celled and single pile, with a cross passage to the left gable and the forehouse (principal room) and parlour sharing a central stack. Evidence suggests that the C18 cottage lacked a separate service room.

EXTERIOR
Front: plank door to the left. Two windows to both ground and attic floors, evenly spaced, each with a two-light horizontal sliding (Yorkshire) sash, the lights each having six small panes. Central ridge stack.
Left gable: prominent, projecting scar line for a lower roofed building (possibly a byre of an earlier longhouse), now replaced by a neighbouring property's garage. Two-light Yorkshire sash with two-pane lights to the rear of this scar line, lighting the attic.
Rear: entirely enclosed by the late-C20 extension, but remaining unplastered.
Right gable: directly abuts the neighbouring property.

INTERIOR
The gable wall, exposed within the cross passage retains timber framing fragments including an edge halved scarf joint. The ceiling throughout the original ground floor has exposed joists and broad floor boards that are considered to be original to the cottage. The staircase, although reinstated in 2016, is modeled on the original, being enclosed by timber boarding, although it has been reversed to fit with the first floor room arrangement. The kitchen range in the forehouse is a late C20 insert, but the large cupboard in the chimney breast to the side is thought to be authentic, complete with C18 strap hinges. The internal doors through the cottage are plank and ledged, with planks generally of different widths and hung on C18-style strap hinges. All the doors appear to have been re-hung and some of the strap hinges appear to be modern reproductions. The roof structure is authentic with only minimal evidence of modern replacement timber, most timber being very waney (largely unsquared). It has double purlins that are tusked and pegged to a pair of principal rafters which are tied with a collar fixed with large handmade iron bolts.

Architectural details and the overall form of the original building suggest that it dates to the early C18, possibly incorporating fragments of an earlier timber- framed building, possibly a longhouse. In the 1990s it was extended with a rear lean-to and a rearward projecting wing. It was also refurbished internally, including the removal of the wall to the cross passage and the replacement of the staircase. In 2016 an original style enclosed staircase was reinstated, along with the cross passage wall as a result of Listed Building Consent enforcement action.

Ivy Cottage is listed at Grade II for the following principal reasons:

Historic interest:
* Despite late C20 extension and alterations, the cottage retains a good range of period features and fabric providing evidence of its early C18 form with hints of a possible C17 timber framed longhouse predecessor.