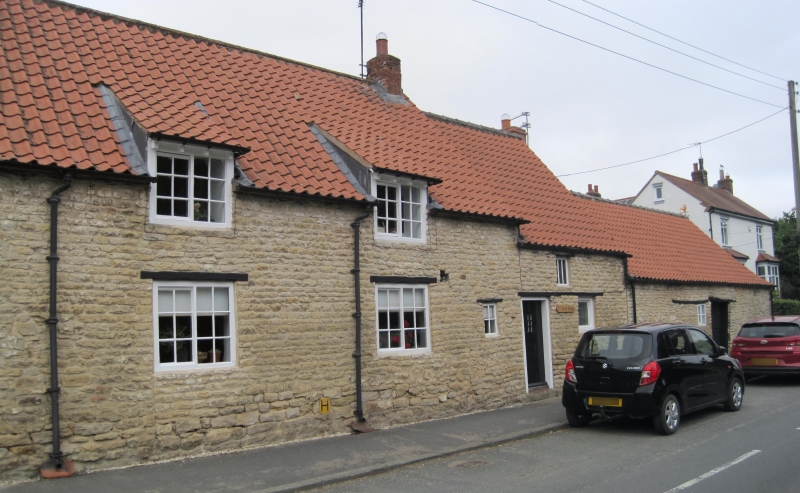 House and two attached byres; now house, flat and outbuilding. C17; raised
later and altered 1978. Cruck frame encased in coursed limestone rubble;
rear largely rebuilt in limestone rubble; pantile roof; rebuilt brick
stacks. Three cell, hearth-passage plan, with outbuilding to right. Single
storey and attic front to left with two windows with single-storey, 4-bay
range to right. To left of single-storey range is a plank door (to house)
with small glazed light, with a later inserted fixed-light window to right,
beneath continuous timber lintel. Small barred window above. Further to
right is a plank stable door within heavy timber frame to former byre,
beyond similar opening now blocked by a small C20 window. To left of house
door, a small fixed-light firewindow with two 2-light small-pane horizontal
sliding sashes further to left. Two raking dormers to attic with similar
windows. Interior: the single pair of raised jointed crucks with saddle
apex, tie and collar beams has been preserved between the two rooms to left.
On both ground and first floors studding has been retained and includes some
lath and plaster infill above the tie beam. In the first ground-floor room
to left the heck and bressummer survive, together with spice cupboard with
raised and fielded panelled door to right of fireplace. Massive spine beam
to second room to left and roughly chamfered square section beams throughout
ground floor. Plank doors have been retained throughout the house, one on
each floor with massive timber lock boxes. North Yorkshire and Cleveland
Vernacular Building Study Group report numbers 324 and 887: Thornton Dale,
Cruck Cottage (formerly called Dixon's Cottage), 1967 and 1980.