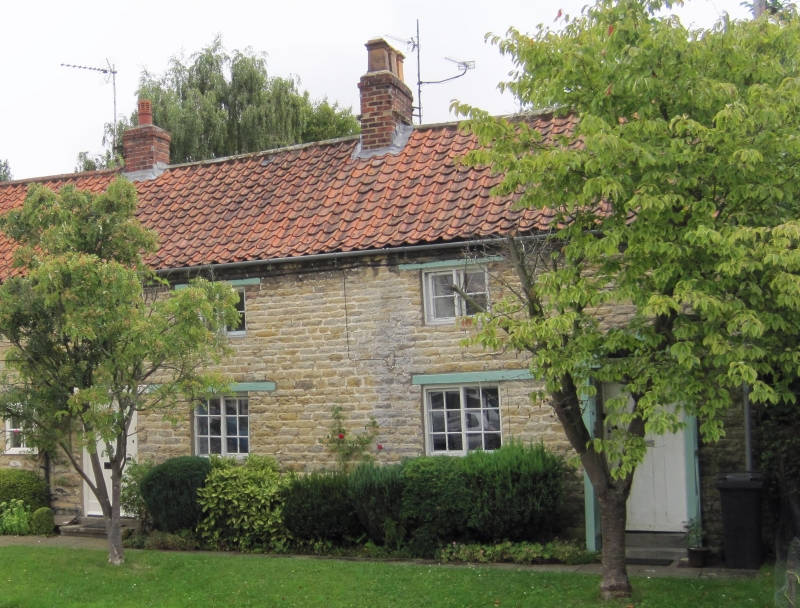 PLAN: Two-cell with central stack, entrance in line with the staircase adjacent to the south gable end. Each cell is partitioned to create a small service room to the rear; that in the southern cell opened up with a C20 archway. Brooklet House was possibly created from two single-cell cottages, the northern cottage being gable entry from a cross passage shared with Rose Cottage. The attic floor of Brooklet House extends as a flying freehold over this cross passage.

EXTERIOR: Front: plank door to the right end of the elevation, protected by an open, gabled, timber porch. Two ground-floor windows, both horizontal sliding Yorkshire sashes with two lights of six small panes, with slightly smaller two-light Yorkshire sashes (with sashes of two panes) directly above lighting the attic. Central stack appears to have been heightened in the C19 or early C20. Undulating ridgeline.
Rear: a Yorkshire sash with two four-pane lights is at the left end of the elevation, with a similar window to the ground floor right now being internal to the kitchen extension.
South gable concealed by vegetation at time of survey, but believed to be blind.

INTERIOR: The stairs are separated from the principal room by a planked partition and a plank door hung on C18 H-L hinges. At the foot of the stairs there is a built-in wall cupboard with plank doors on C18 strap hinges. A number of other doors in the property also retain early strap hinges. The two fireplaces have C20 surrounds. The roof structure is partially exposed within the attic with very waney (unsquared) purlins extending between the gable walls and the wall including the central stack. Exposed rafters are of thin cross-section and are also very waney.

Architectural details indicate that Brooklet House is probably early C18 in origin, but may have been two separate cottages for part of its history. Probably in the early C20 a small single-storey extension was added to the rear to provide a bathroom. Subsequently a lean-to extension covered the remainder of the ground floor to provide a galley kitchen.

Brooklet House was originally listed as a single List entry as Brooklet Cottage and Rose Cottage. Rose Cottage (attached to the north) was removed from the listing in 2015 as it was shown to have been rebuilt in the 1970s.

Brooklet House is listed grade II for the following principal reasons:
* Age: a good example of a local vernacular cottage, with the added interest of the evidence that the building was originally a pair of single-celled, early-C18 cottages;
* Period features: retains a good range of early features including hinges, joinery, timber partitions and the roof structure.