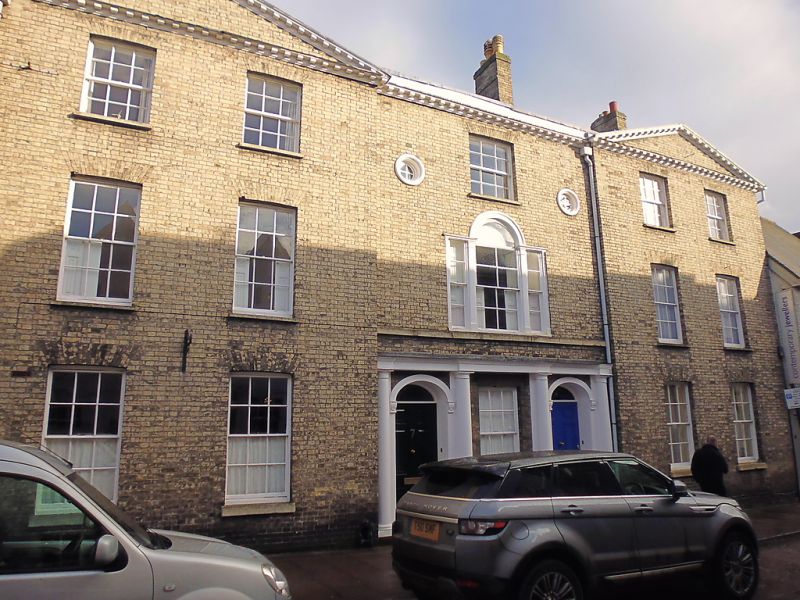 House, later a pair of houses, now divided into 5 flats. Early
C19, with an earlier core. Timber-framed; faced in white
brick; the slate roof, with a wood dentil eaves cornice, has
pedimented wide wings and a slightly recessed centre.
EXTERIOR: 3 storeys. 5 window range, arranged 2:1:2: 12-pane
sashes in plain reveals with flat gauged arches and projecting
stone sills, apart from the 1st storey centre which has a
large Venetian window with the upper arch blocked and a raised
stone band at sill level. The sash window above it is flanked
by 2 circular stone-framed bulls-eye windows. The ground
storey has 2 balanced 6-panelled doors, with elliptical arched
doorways and a 12-pane sash window between them, set in a
tetrastyle recess with Tuscan columns. The back wall is in
flint rubble: a 12-pane sash window with a Gothick head lights
the stair. A rear wing extends at each end. On the north,
behind No.7, the wing has walling in a mixture of flint, old
red brick and reused stone, with rough stone quoining; on the
south, behind No.8, the 2-storey rear is timber-framed and
rendered with a C20 extension at the east end.
INTERIOR: the entrance hall has an early C19 central stair
with one flight dividing above a half-landing into 2: stick
balusters, moulded newels, a plain wreathed handrail and
closed strings. The timber-framed range running through from
the back into the front of No.8 is the oldest part of the
building with the top storey on the street frontage added in
the early C19. Several main beams exposed or boxed-in on the
ground storey, 2 with heavy ornate brackets.