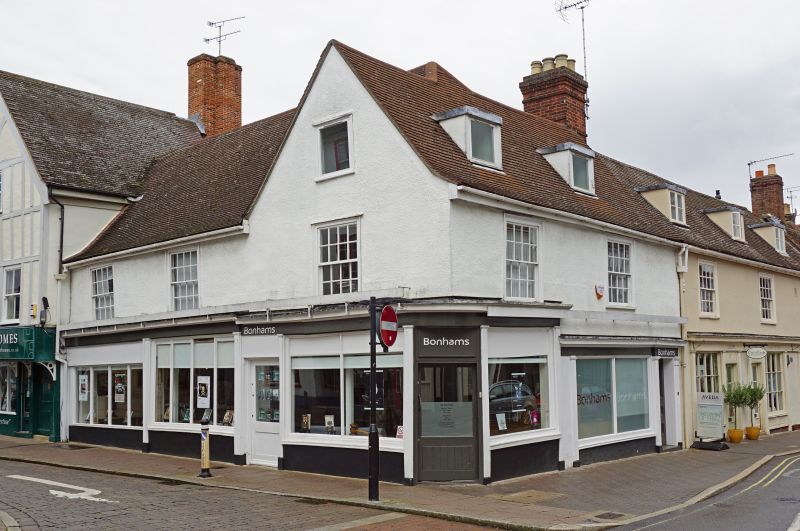 Includes: No.11 Tools and Things HATTER STREET.
Shop, formerly a house and shop. C17 with an earlier core and
later alterations. Timber-framed and rendered with C20
plaintiles: an L-shaped building, in 2 separate ranges, on a
corner site with a return front to Hatter Street. The roof of
the Hatter Street range tops over the Churchgate range, which
has a gable end facing Hatter Street.
EXTERIOR: 2 storeys and attics. 2 windows on Churchgate
Street: 16-pane sashes in flush cased frames; 3 similar
windows on Hatter Street. 2 flat-headed dormers with C20
fenestration to Churchgate Street. The ground storey has a C20
shop front.
INTERIOR: the 2 ranges of the building have been occupied as
separate dwellings, but were probably part of one house
originally. The Churchgate Street range, in 3 bays, has most
of its timbers covered or boxed-in, with the exception of one
trimmer which has a very wide chamfer and broach stops,
suggesting a late C15/early C16 date. The Hatter Street range,
in 2 bays, was formerly jettied and has an exposed
early-to-mid C16 ceiling to the ground storey, the main
cross-beams with a roll-and-hollow moulding and run-off stops,
the joists ogee-moulded. The rear (east) wall has been removed
for a later extension, but a beam with embattled ornament
remains at ceiling height.
In the southern of the 2 bays is a good blocked stair-trap
with moulded surrounds to the former opening. No exposed
timbers on the upper storey or the roof, which may well have
been replaced in conjunction with creating an attic storey.