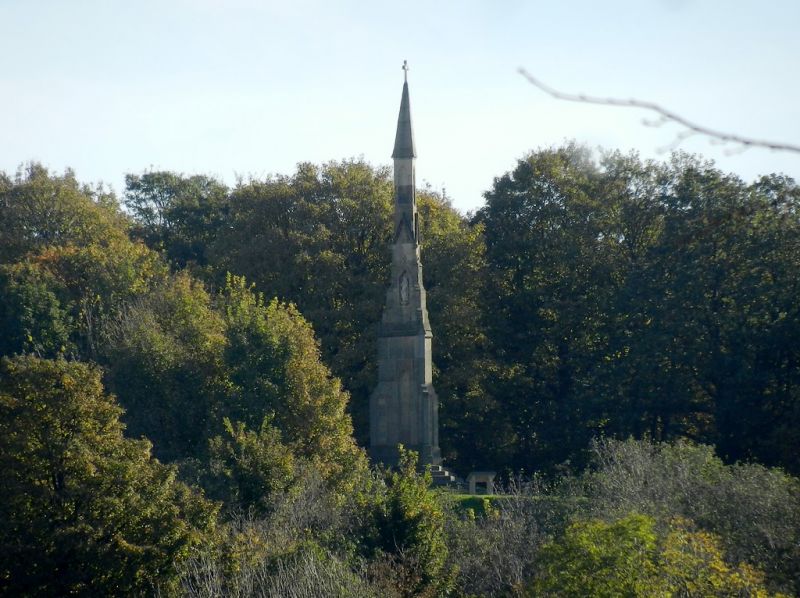 Monument, 1835 by Matthew Ellison Hadfield to commemorate those who died in Sheffield in the Asiatic cholera epidemic of 1832. Around 1900 alterations were made to the flying buttresses to provide greater stability. Major restoration in 2003 to 2004.

Monument, 1835 by Matthew Ellison Hadfield to commemorate those who died in Sheffield in the Asiatic cholera epidemic of 1832. Around 1900 alterations were made to the flying buttresses to provide greater stability. Major restoration in 2003 to 2004.

DESCRIPTION: not inspected, information from other sources. The Gothic Revival monument stands in Monument Gardens on a slight mound, overlooking the city below and at the south-west end of a straight axial walk. The ashlar stone structure is triangular in plan, similar to an Eleanor Cross. It takes the form of a spire rising out of the ground with a tall, slender shaft in three stages supported by buttresses and standing on a stepped base.

The first stage stands on a four-stepped base and has a two-stepped plinth. It is supported by buttresses which were originally open, but have since been filled in to form blank, pointed lancets. The central shaft has a larger blank pointed lancet to each face. The second stage has stepped buttresses and a cusped, ogee-headed niche to each face of the shaft. Each niche contains a statue (replacing the original statues, which were badly eroded and damaged). The statues represent Faith, with a wine goblet, Hope, with a Lamb of God, and Charity, with a wheat-sheaf. The third stage has a slender spire with blank pointed lancets with cusping and a steep pyramidal cap. The cap is topped by a stainless steel cross incorporated to replace the lost original.

The Cholera Monument commemorates those who died in Sheffield in the 1832 epidemic of Asiatic cholera and stands as the only marker for all those buried in mass graves. It was intended to represent the enormity of loss of life and is the most significant memorial to commemorate this epidemic in Britain. The epidemic reached Sheffield in July 1832 and as the epidemic took hold, fear of infection grew. In August, the 12th Duke of Norfolk offered a sufficiently isolated position within his estates for a mass grave, but it was left to his agent, Michael Ellison, to decide the precise location. During the period from July to November 1832, 402 Sheffield people died of cholera and around a thousand more contacted the illness. Of those who died, 339 were buried in the mass grave on this site, the only individual grave being that of John Blake, who was in the office of Master Cutler at the time. When the epidemic was over, the local Board of Health decided that the remains of the funds raised to deal with the epidemic (£141.4s.9d) should be employed to erect a suitable memorial at the Cholera Burial Ground. To this were added £50 from the Duke of Norfolk and further public donations to raise the estimated cost of £300.

Designs for the proposed memorial were produced by the architect Matthew Ellison Hadfield, nephew to Matthew Ellison. The commission was the first undertaken by Hadfield after completing his training, following which he would become one of Sheffield’s most successful architects, with a flair for Gothic Revival. His design of a slender Gothic shaft elevated on a series of steps was intended to be inspirational and uplifting: Pevsner described it as the 'Gothicists equivalent for an obelisque'. The sculptors were Earp & Hobbs of Manchester and the mason was Mr Crowther. The cornerstone was laid in late 1834 by James Montgomery, notable poet and social reformer, who was closely involved in its commissioning. Construction was completed by May 1835 and planting added to complete the setting. A ceremony of dedication was led by Montgomery. The monument stood on an elevated position in the Cholera Burial Ground and had a carefully considered visual relationship with the chapel of the Shrewsbury Hospital Almshouses, the two aligned on a straight axial walk.

In January 1839 the upper part of the shaft was blown down during a hurricane, but was soon repaired, and in 1869 it was struck by lightning and again rebuilt. Around 1900 the arches of the flying buttresses at each angle were in-filled and the lower part of the shaft was thickened to give the memorial greater stability. The cross was also removed.

In 1929 the 16th Duke of Norfolk gave the grounds, now known as Monument Gardens, to the city. Three tower blocks were built adjacent to the monument in the 1960s; these were demolished in late 2004.

A storm on the night of 25/26 January 1990 severely damaged the monument, after which the top of the monument was removed for safety reasons. In 1997 Sheffield businessman Jim Hurley initiated a scheme to restore the monument. By the summer of 1999 the majority of the dismantled pieces had been located in Graves Park and Whirlow Park. Research into the history of the monument was commissioned and subsequently many agencies offered support for the restoration free of charge. The cost of restoration was estimated at £350,000, of which 75% was provided by the Heritage Lottery Fund. The restoration began in April 2003. It was decided to keep the buttresses closed as it provided considerable additional strength. Additionally a hole was drilled vertically through the monument and 6m into the bedrock and stainless steel rods and plates were installed to anchor the monument. The three statues on the second tier were badly eroded and stones on the third tier and spire were damaged and so were replaced. The lost cross at the apex was also replaced with a stainless steel cross of a modern design. The restoration was undertaken by the architects’ practice Hadfield Cawkwell Davidson, sculptor Mike Chapman, mason Maysand and structural engineers Ancon Building Products. On 26 May 2004 the monument was re-dedicated in a ceremony attended by the 18th Duke of Norfolk, Sheffield’s Lord Mayor, Diane Leek, and Jim Hurley.

The original bronze plaque, installed at the time of the monument’s construction in 1834 was stolen in 1998, but returned two years later, after an appeal in the local press. It was stolen again a few days before the re-dedication ceremony in 2004. In 2005/2006 the monument received the Marsh Award for Public Sculpture in Britain in the restoration category. A new plaque was commissioned and installed in 2008 from the proceeds of the prize money.

The Cholera Monument, Monument Gardens, Sheffield, 1835 by Matthew Ellison Hadfield, altered around 1900, with a major restoration in 2003 to 2004, is listed at Grade II for the following principal reasons:

Architectural interest:
* an unusual slender Gothic shaft elevated on a series of steps designed to be an inspirational and uplifting memorial;

* an early design by Matthew Ellison Hadfield, who was to become one of Sheffield’s most successful C19 architects, with a flair for Gothic Revival architecture.

Historic interest:
* the monument commemorates the 402 people of Sheffield who died in the 1832 Asiatic cholera epidemic, standing as the only marker for all those buried in mass graves and intending to represent the enormity of loss of life; it is the most significant memorial to commemorate this epidemic in Britain;

* a growing fear of infection in Sheffield resulted in the Duke of Norfolk giving land for an isolated Cholera burial ground and when the epidemic was over the Board of Health decided a memorial should be erected to commemorate those buried, the burial ground later becoming known as Monument Gardens.

Group value:
* the monument stands on an elevated position in the Grade II-registered Monument Gardens and has a carefully considered visual relationship with the central chapel of the Grade II Shrewsbury Hospital Almshouses, both aligned on a main axial walk through the gardens.