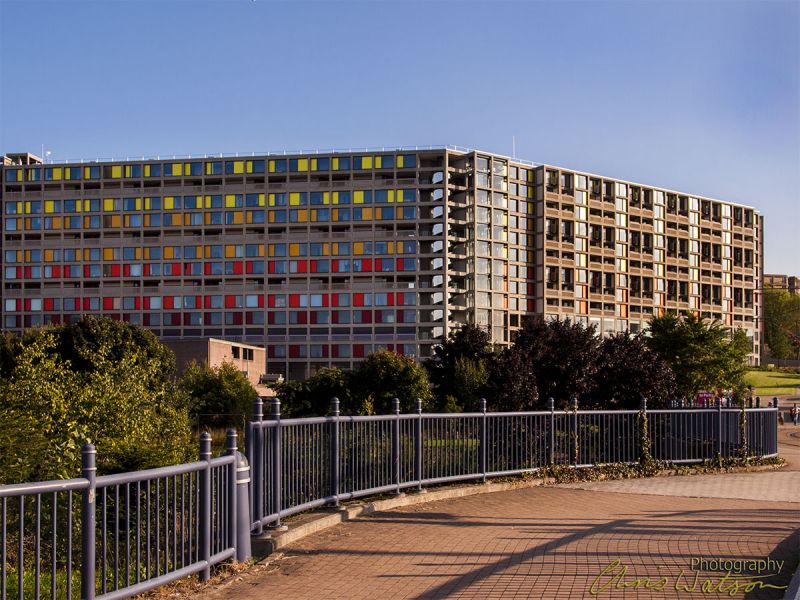 Flats and maisonettes. 1957-60 by Sheffield Corporation City Architect's Department under J L Womersley, designed by Jack Lynn and Ivor Smith with F E Nicklin and John Forrester (artist); Ronald Jenkins of Ove Arup and Partners, engineer. Formally opened in 1961 by Hugh Gaitskell. Reinforced concrete frame, partly board marked, with concrete balcony fronts and brick infill in four shades - a progression of purple, terracotta, light red and cream. Continuous flat roof of even height throughout the estate. 995 flats on 17 acres (total site 32 acres) at density of 192 ppa and a unit cost of £2,800 each (total cost £2,158,591). The scheme includes 31 shops, 4 pubs, a laundry boiler house, Garchey refuse station and garages.
The flats and maisonettes were designed on a steeply sloping site (gradient 1 in 10) keeping a constant roof level, so that the height of the blocks range from four to thirteen storeys. A standard three-bay unit with central staircases set in pairs in H-shaped frame is the main unit of construction and design, each containing a one-bedroom and a two-bedroom flat, a two-bedroom and a three-bedroom maisonette, all with balconies. Access decks at every third floor serve maisonettes on and above the deck and one-storey flats set below. The innovatory width of these four 'street decks' was a key feature of the architects' concept; all save the uppermost (Norwich Row) debouches on to ground level at some part of the scheme, and are served by 13 lifts and two large goods' lifts which gave milk floats and other services direct access to the decks, enhancing the image of 'streets in the sky'. Park Hill is formed of four ranges linked by bridges across the upper decks, all cranked at obtuse angles (between 112 and 135 degrees) to maximise the site aspect and panoramic views. Lifts (mainly in pairs), stairs, pubs and laundry are set at nodal points. Shops, boiler house and former garchey station set on lowest point of site to north west.
Elevations treated as a regular exposed grid of the board-marked concrete frame. Balconies on those elevations not served by decks give to a rhythmic 2:1 pattern in both directions across facades, varied only at corners. Balconies and decks with vertical concrete balustrading, similar pattern to slender steel balustrading to bedrooms. Timber windows with aluminium horizontal opening sections. Flush timber doors.
Interiors. The rigid grid of flats and maisonettes ensures that kitchens and bathrooms are stacked in pairs to facilitate servicing. Interiors not of special interest.
The Pavement area of shops. Most shops retain original varnished timber shutters and glazed shopfronts in timber surrounds over concrete plinth with weathering. Many shopfronts - including Neils News and the grocery opposite - have timber panelled dado. These original shopfronts survive behind later security shutters. Linked two-storey block with open stairwell and columns clad in gold mosaic. Housing Area Office later and not of special interest.
Public Houses. There are four on the estate, all of which retain most of their original features. All are four-bay units in the ground floor of the block, mostly close to the shopping centre. All have common plan: they face in two directions, with a lounge on one side and public bar on the other, linked by central bar and glazed screen.
The Earl George Public House, The Pavement, retains original fenestration of single lights (with applied later latticework) over inset timber panels, with set-back clerestorey glazing. Original bar with later facing panels, and timber boarded surround, set under lowered ceiling with inset lighting. Marble tiled flooring round bar and main entrance.
The Link, Gilbert Row. Four-bay canted front, formed of timber panels in concrete bays with mosaic spandrels, with painted mosaic fronts. Public bar entrance on internal court has three projecting canted bays and entrance with original doors. Public bar retains bar and fixed bench surrounds. The lounge has been remodelled.
Scottish Queen, Gilbert Row. Brick faced. Tripartite windows set forward, only the large upper lights glazed, the others infilled with timber panels. Clerestorey glazing above level with building line. Original bar counter. Timber columns with bevelled and varnished timber boarding, marble tiled floors. Original doors, screen between bars with glazed tiles and later coloured glass. Fixed bench seating in both bars. Adjacent are public lavatories, clad in grey and gold mosaic, disused in 1996.
The Parkway, Hague Row. Fenestration with projecting four bays of timber windows over timber dado and set back clerestorey, the surrounds clad in slate hanging, with two-bay mosaic mural. Original interior with central bar and bevelled timber panelling; fixed seating to both bars.
Park Hill Social Centre on two levels with ramp to upper entrance. Brick with concrete cornice, roof and sills; timber windows. Interior with sprung timber floor.
ASSESSMENT
Park Hill is of international importance. It is the first built manifestation of a widespread theoretical interest in external access decks as a way of building high without the problems of isolation and expense encountered with point blocks. Sheffield and the London County Council had the only major local authority departments designing imaginative and successful public housing in the 1950s, and this is Sheffield's flagship. The decks were conceived as a way of recreating the community spirit of traditional slum streets, with the benefit of vehicular segregation; Park Hill has been regularly studied by sociologists ever since it opened, and is one of the most successful of its type. The deck system was uniquely appropriate here because the steeply sloping site allowed all but the uppermost deck to reach ground level, and the impact of the long, flat-topped structure rising above the city centre makes for one of Sheffield's most impressive landmarks. The result was Britain's first completed scheme of post-war slum clearance and the most ambitious inner-city development of its time.