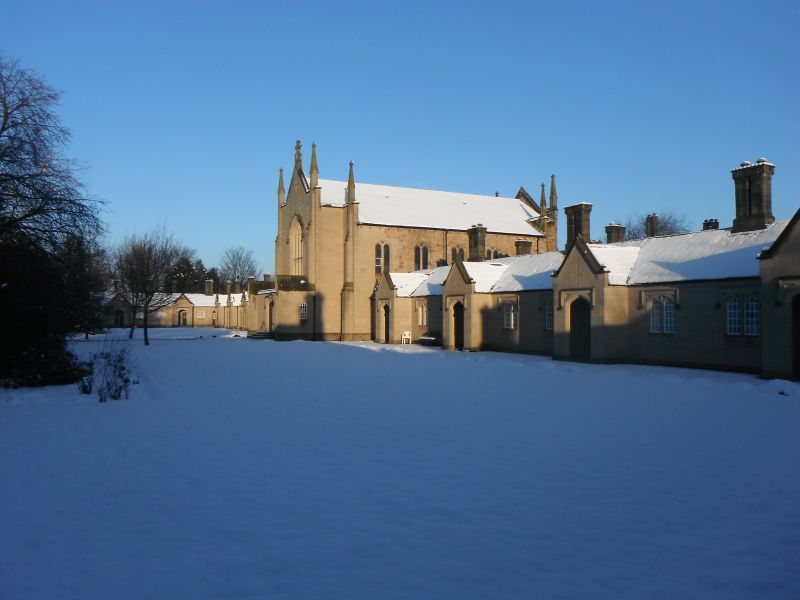 Formerly known as: Talbot Hospital (Almshouses) NORFOLK ROAD.
Almshouses with adjoining chapel, chaplain's house and
infirmary, and boundary wall with gates. 1825, restored 1989.
By Woodhead & Hurst. Ashlar with slate roofs and corbelled,
billeted paired stone ridge stacks. Tudor Gothic Revival
style.
EXTERIOR: double chamfered plinths, chamfered eaves, coped
gables. Single storey. U-plan, with central chapel and the
chaplain's house and infirmary at the ends of the wings.
Chapel has buttresses with finials. Chancel, nave with
clerestory and aisles, full width west porch.
Chancel has transomed 4-light Perpendicular east window and on
the south side a single lancet with a round-headed bell
opening above it. North side has a Tudor arched doorway. Nave
clerestory has five 2-light pointed arch windows on each side.
West end window removed for restoration at time of survey.
Windowless aisles have set back ends. To the east of the south
aisle, a Tudor arched door with lamp above. West porch has a
Tudor arched doorway with label mould and at each end, a
single lancet.
Flanking the chapel on either side, dwelling ranges with 5
coped gabled porches with Tudor arched doorways and label
moulds, each covering 2 cusped half-glazed doors. Between the
porches, two 2-light pointed arch windows with chamfered
mullions and label moulds. At each end, a single similar
2-light window. At the rear, each pair of dwellings has a
large gable with a 2-light window. In the return angles, plain
doorways.
Left wing has 3 porches and 2-light windows arranged 2:2:2:1.
Right wing has 2 porches and windows arranged 1:2:1.
Chaplain's house, to right, 2 storeys, 2 x 4 windows, T-plan.
Quadruple octagonal ridge stack, 2 similar square gable and
single ridge stacks. Buttressed street front has central blind
gabled dormer with coat of arms, and two 2-light pointed arch
windows on each floor with label moulds. Left gable has a
2-light pointed arch window on each floor. Left return has a 2
storey gabled porch with a 4-light window and below, a Tudor
arched door. On either side, a 2-light window, the right one
under a through-eaves dormer. Below, a 2-light window to left
and 2 similar windows to right.
Infirmary block, to left, now houses, 2 storeys; 5 window
range. Street front has on each floor a central blank lancet,
flanked on either side by 2-light pointed arch windows.
Beyond, 2 pinnacled buttresses. Between the buttresses, a
single square headed window on each floor. Right gable has a
2-light pointed arch window on each floor. At the rear, a
large Tudor arched opening to an access passage.
INTERIOR: chapel rendered. Chancel has moulded Tudor arch with
clustered shafts, and shallow rib vault. Single Tudor arched
doorway each side. Nave has 5 bay Tudor arched arcades with
clustered filleted shafts and flat ceiling with moulded span
beams. Traceried glazed wooden screens between nave and aisles
and at west end. West end has a 4-light Perpendicular window
and a Tudor arched doorway below.
Fittings include panelled benches and stalls and square wooden
skeleton pulpit and turned lectern, all C19.
SUBSIDIARY FEATURES: outside, attached boundary wall has
half-round coped plinth, the railing removed, and 3 pairs of
square gate piers with traceried panels. In the centre, a
double spearhead gate with coat of arms, and at either end, a
single gate.
(The Buildings of England: Pevsner N: Yorkshire: The West
Riding: London: 1967-: 467).