Church of St Crispin with Christchurch 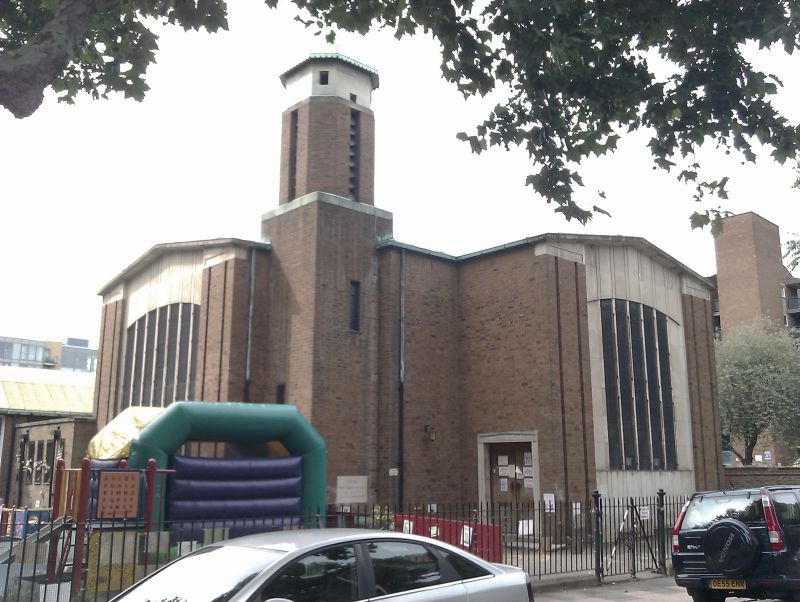 Parish church. 1958-9 by Thomas F Ford. Stock brick with stone and artificial stone dressings; copper roofs. Broad Greek cross plan with central saucer dome and projecting chapel. The church is liturgically reversed, but liturgical points have been used throughout in the preparation of this description.

Short tower to side of main entrance front, which has pairs of entrance doors set in stone surrounds under segmental-headed west window. Broad transepts treated as a semi-classical composition with broad piers and incised capitals, the seven-light segmental arch between has no Gothic mouldings. The east end is lit by square-headed windows to either side, those to sanctuary higher. Low side chapel with flat roof also has square headed windows and large hopper heads.

The interior is of particular interest, and is virtually unaltered. From vestibule, entrance to the church is via pairs of doors covered in red leather. The pews and hassocks are also covered in leather, a reminder of Bermondsey's traditional industry. The broad nave is lined with shallow pilasters and delicate rococo capitals set in frieze. Moulded panels to front of organ gallery at west end. Pendant lights are also part of Ford's design.

The chancel is set up three steps. Broad arch frames choir, whose choir stalls are set high between paired square columns. They are entered behind the built-in pulpit and reading desk, which form a unified composition with the front choir stalls and altar rails, whose simplified Grecian mouldings resemble those to the organ gallery. The broad nave and chancel arch means that little adaptation has been required to bring the church into line with modern liturgical practice.

The focus of the church is on a fine mural by Hans Feibusch depicting the legend of Crispin and Crispinian, patron saints of shoes and leather. A large mural, mainly of sky and clouds, fills the dome and was painted by Feibusch's protégé, Phyllis Bray.

Side chapel commemorates the rebuilding of St Crispin's, and its unification with the parish of Christ Church. Glass by M C Farrar Bell from Christchurch.

Ford's church was a replacement of that of 1879-80 by Coe and Robinson destroyed in the war. T F Ford was a prominent designer of churches in the 1950s, particularly as war damage surveyor to the Diocese of Southwark, and he worked extensively with Hans Feibusch (1898-1998), the last surviving artist exhibited in Hitler's exhibition of Degenerate Art and who emigrated to England in 1933. Edward Mills commissioned his first church mural, for Colliers Wood Methodist Church, but it was for the Dioceses of Chichester and Southwark that he worked most extensively. Ford was Feibusch's most frequent collaborator, beginning in 1951 when Ford restored St John, Waterloo, as the Festival of Britain church. This is already listed, as one of the first Commissioners' churches built under the Act of 1818. However, St Crispin's is the most complete surviving of all Ford's new interiors, and the one in which art and architecture is exceptionally well integrated.