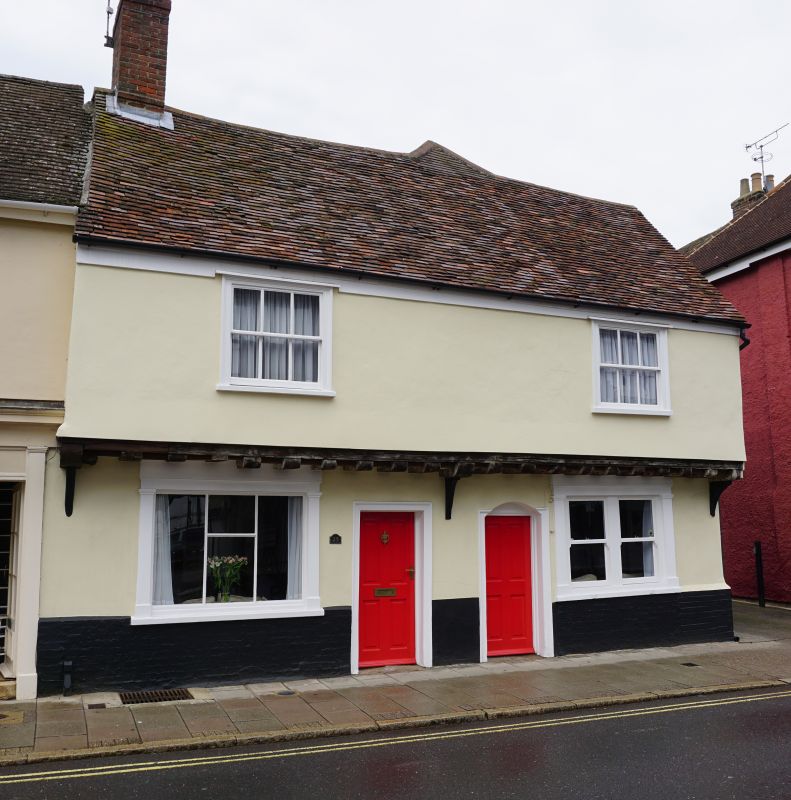 Shop, formerly divided into 2. Early C16. Timber-framed and
rendered with a high brick plinth and continuous jetty.
Plaintiled roof with a plain eaves soffit.
EXTERIOR: 2 storeys: a 2-bay front range and a short rear
range at right-angles to it. In the east gable wall a beam set
higher than the jetty level indicates a former carriage
entrance into a rear yard. The jetty has been widened to allow
for the insertion of sash windows on the upper storey. 2
window range: 6-paned sashes in heavy cased frames which
project slightly from the wall-surface. 2 C19 shop windows to
the ground storey, each with pilasters and a moulded cornice
to the fascia: on the left, slender glazing-bars, on the right
a single dividing mullion. 2 adjacent 4-panelled doors (one
blocked) in plain architraves.
INTERIOR: exposed timber ceilings to the ground storey. The
2-bay front range has the remains of a C19 chimney-stack set
internally on the west gable wall, but it was formerly
unheated, and divided into 2 shops by a stud partition, now
removed. The rear range, roofed by a single span, was also
divided originally, with a chimney-stack with 2 back-to-back
hearths between the 2 rooms.
In the back wall of the front range, immediately to the left
of the former partition, are the remains of a doorway with a
plain 4-centred arched head which gave access to the western
room of the rear range. This still has an open fireplace,
plastered, with a plain timber lintel. The ceiling-beams and
joists throughout the ground storey are plain, the joists
unchamfered. 3 blocked original stair-traps, one in the
eastern front bay and one in each of the rear rooms, indicate
an irregular division of the premises when first built, with
each dwelling having a shop in the front and a rear
living-room, but the eastern half with access to the major
part of the upper storey. Wide substantial studding and
tension bracing; housings in the wallplates for
diamond-mullioned windows. Upper ceilings a later insertion;
roofs inaccessible.