A Grade I Listed Building in Melton Mowbray, Nottinghamshire 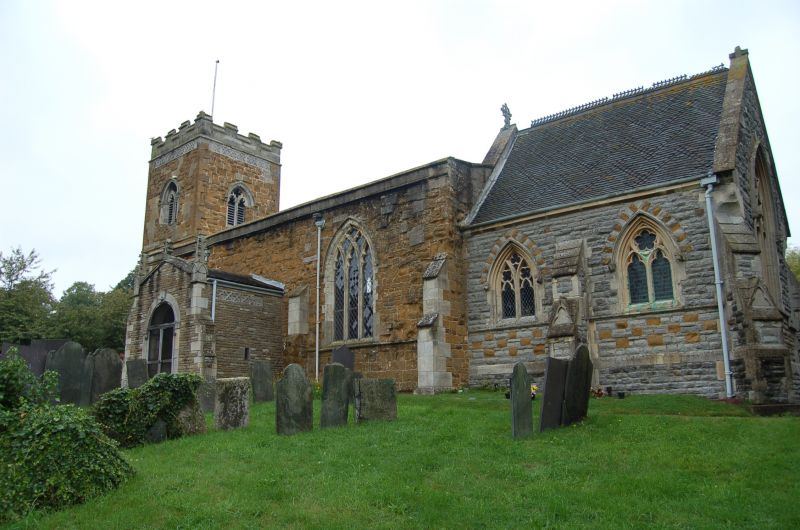 UPPER BROUGHTON RECTORY ROAD
SK62NE (north side)
6/146 Church of St Luke
1960
GV I
Church. Remains of south arcade circa 1200, north arcade C13, tower
C13 and C14, porch 1733, north aisle and chancel rebuilt 1855 by
S. S. Teulon. Predominantly ironstone, thinly coursed sandstone
porch, blue lias chancel, all with limestone dressings. Lead roofs,
the steeply-pitched chancel roof is tiled. Nave of 4 internal bays,
south porch, north aisle, 2-bay chancel, west tower. The porch has a
quatrefoil frieze (re-set) and a round-arched portal and within, a
fragment of a Norman tympanum. Two, tall, south windows, one of 2-
lights the other of 3-lights both with cusped intersecting tracery.
Two, square-headed, 2-light clerestorey windows on north side.
Similar, larger windows to the later north aisle. The chancel has
2-light windows each with a foiled circle in head. 3-light east window
with a star in the head. The 2 stage tower has later clasping buttresses
to lower stage, small lancet west window, 2-light, louvred bell-chamber
openings and quatrefoil frieze under crenellated parapet.
Interior: remains of earlier south arcade built into south wall: one
double-chamfered round arch, on round piers with moulded capitals one
with zig-zag decoration the other with nailhead. 4-bay double-chamfered
north arcade on octagonal piers with moulded capitals which have nailhead
decoration. C14 octagonal font with relief tracery in the panels.
Slate memorials on north wall: 1788 to John Brett, elegantly shaped and
decorated with flowing foliage, signed W. Barnes; 1823 to Elizabeth,
wife of John Brett, signed Pratt, Nottingham.
N Pevsner. The Buildings of England, 1979.