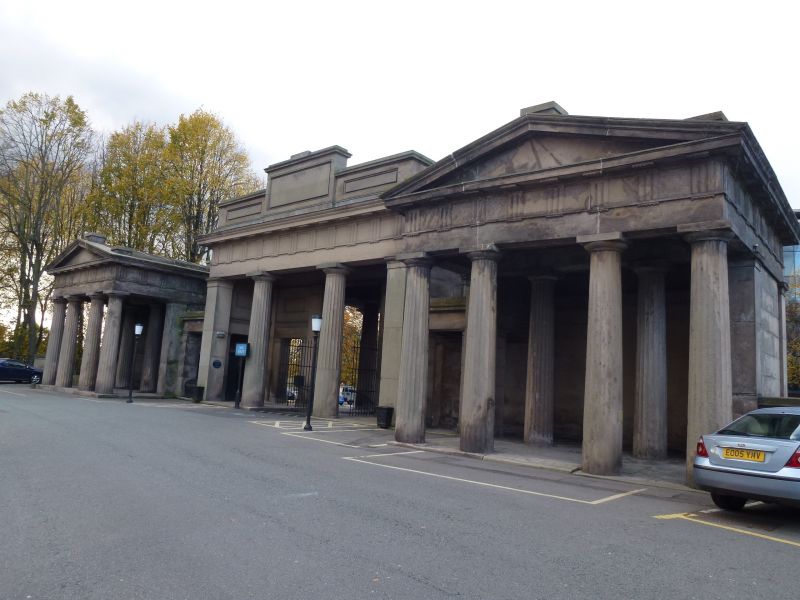 4/602 Propylaea (formerly
listed as Grand
1.6.67 Entrance, or Propylaea
with retaining walls and
railings of forecourt)

Propylaea. 1811-1813. By Thomas Harrison of Chester. Ashlar Manley sandstone
with lead roof. Central gateway with colonnades to either side connecting with
pavilions. West front: Central gateway of tetrastyle amphiprostyle form with 2
rows of Greek Doric columns which are monolithic and fluted to their upper
bodies but merely faceted below. Standing on abaci they have wider intercolum-
nation to the centre. Doric entablature above with metopes guttae and mutules
continuing around gateway. Panelled attic storey above with raised tablet to
centre. To rear dividing wall are a central gateway of full height with lower
pedestrian gateways to either side and sunken panels with moulded surrounds over
these. To either side are blank walls with mouldings to tops connecting the
gateway to the side pavilions which each have two fluted Greek Doric columns to
the centre and antae to the corners. Doric entablature above continuing around
each pavilion. Pediment with blank tympanum over. Each has a wider opening
between the central columns. East front: Central distyle gateway with antae to
sides all being monolithic and the central columns fluted to their upper bodies
and faceted below. Panelled attic and raised tablet as on west front. Dividing
wall has gateways and panels as on west front. One-bay colonnades to either
side supported by antae. Portico wings to either side each of tetrastyle form
with second phalanx of columns distyle in antis behind, all monolithic. Wider
intercolumnation to centre. Entablature over supporting pediment with blank
tympanum. The Gateway colonnades and wings all have stone coved ceilings. There
are rectangular pedestals to apex and lower angles of pediments. J Mordaunt
Crook says of the building in his book The Greek Revival that it combines
"direct antique inspiration - the Temple of Philip at Delos and the so-called
Temple of Augustus at Athens - with the primal simplicity of the Sublime and the
variety of light and shade associated with the Picturesque".

Nikolaus Pevsner and - The Buildings of England : Cheshire.
Edward Hubbard

Moira A R Ockrim - "Thomas Harrison and the Rebuilding of
Chester Castle: A History and Reassessment".
Journal of the Chester Archaeological
Society, Vol 66, 1983.