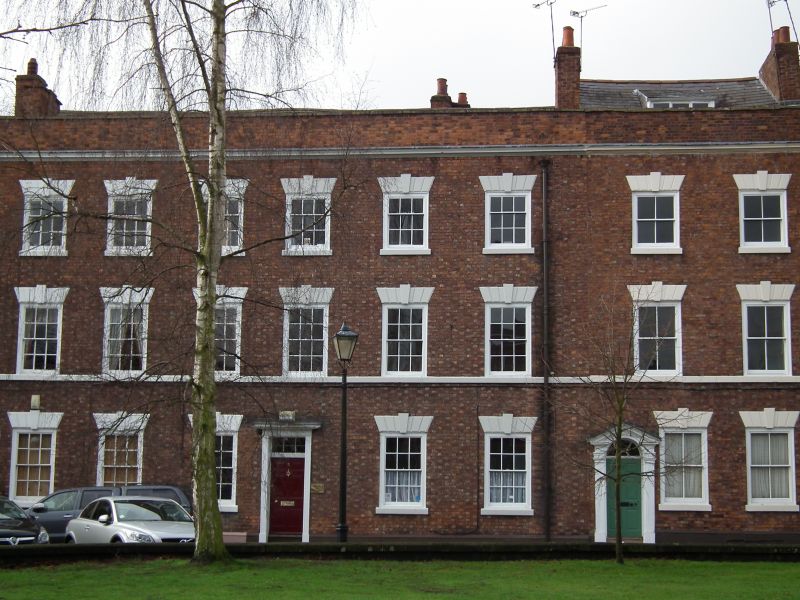 Town house, now office. Probably 1771-2 for Samuel Hostage as
leaseholder from Dean and Chapter. Flemish bond brown brick
with pale headers; grey slate roof steeper than that to Nos 1
& 2 (qv).
EXTERIOR: cellar and 3 storeys. Painted stone plinth. 2 stone
steps to door of 6 fielded panels with radial-bar fanlight in
Roman Doric timber case with fluted pilasters and open
pediment. 2 flush sashes per storey, now of 4 panes; painted
stone sills to first and third storeys and sillband to second
storey; painted rusticated wedge lintels with false keystones;
moulded painted stone cornice; brick parapet with stone
coping; one chimney visible. The rear looks across a short
yard to the back of the buildings east of Northgate Street.
INTERIOR: the cellar has a 2-panel door, stair with newel and
rail of C17 type, quarry floors and, under the house, walls
largely of brick; brick wine-bins; some chamfered oak beams. 3
stone steps in opening with stone reveals in east wall lead
down to lower cellar under pavement of Abbey Square which has
coursed sandstone walls beneath a probably C18 segmental
barrel vault of brick, reputedly an ecclesiastic court cell.
The first-storey front room has broad panels beneath
dado-rail, eared fire-surround of carved wood with festoon
frieze and embellished cornice, door of 6 fielded panels in
eared architrave, panelled shutters and plaster cornice. The
stair-hall has round archway with fluted pilasters. The south
rear room has a probably Georgian range of cupboards against
the east wall, panelled dado and fire surround with eared
architrave; the north rear room has a late Georgian
fire-surround in a blocked earlier broad opening with a
cambered oak bressumer on sandstone piers with lambs tongue
stops to chamfers; a 2-tier corner cupboard has fielded panels
and old hinges. The narrow-well open-string stair has curtail
step, rose, 3 column-on-vase balusters per step, moulded swept
rail and panelled dado with bolection panels above.
The second-storey front room has door of 6 fielded panels,
panelled embrasures with eared architraves, fire surround with

eared architrave and modillion cornice. The rear south room
has door of 4 fielded panels on HL hinges, a simple eared fire
surround and a basket-arched alcove. The landing with chinois
balustrade overlooks the stairwell; the narrow stair to the
third storey is offset, and has winders. The third storey
rooms have 2-panel doors; a simple eared fire surround. A
narrow attic stair, similar to that to the third storey; a
2-panel attic door.
(Dean and Chapter of Chester Cathedral: Leases: 1771-1846: EDD
10.07.13; Burne RVH: Chester Cathedral: London: 1958-:
218-20).