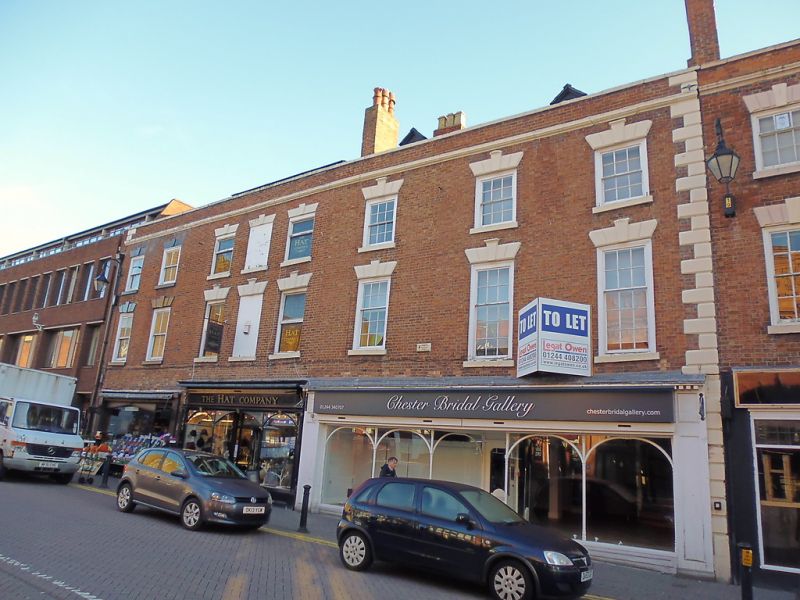 Range of 4 shops and town houses, now 3 shops with an office
in No.72 above No.70. Mid C18. Brown brick in Flemish bond to
front; grey slate roof has ridge parallel with street.
EXTERIOR: 3 storeys and attics. Rusticated quoins of painted
stone at south end, but removed except for 2 above the cornice
at the north end. C20 shopfronts, in genteel keeping. Windows
are flush sashes with painted stone sills and rusticated wedge
lintels, perhaps false, mostly with corniced keystones. To the
second storey No.66 has a pair of tall 15-pane sashes, No.68 a
shorter 16-pane sash, No.72 a replaced 2-pane window to each
side of a blocked opening, and No.74 two 4-pane sashes. To the
third storey No.66 has two 12-pane sashes and No.68 one, No.72
has a replaced 2-pane window to each side of a blocked opening
with gauged brick heads and plain lintels and No.74 has two
4-pane sashes. A cornice beneath the parapet of 6 brick
courses with a plain stone coping. One gabled roof-dormer each
to Nos 66 & 68; a raking full-width dormer with
horizontally-sliding sashes to No.72. Brick chimneys at south
end of No.66, on the ridge of No.68, three between Nos 68 & 72
and one at the north end of No.74.
INTERIORS: could not be inspected systematically, but features
include a rock-cut brick barrel-vaulted cellar, running back,
7 x 3.5m, with former beer-drop blocked in stone. Similar
cellars may exist in other parts of the range. In upper
storeys there are chamfered oak beams, some lambs tongue
stopped; some Georgian stairs.