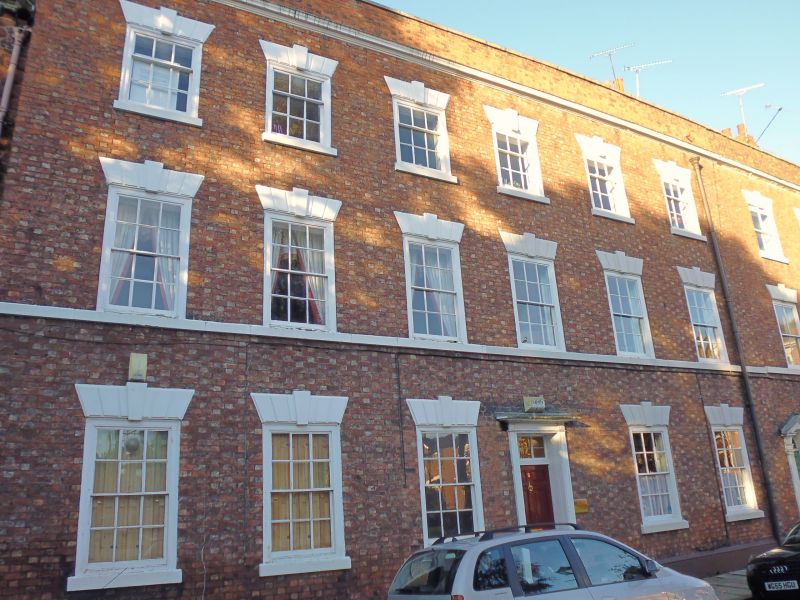 2 town houses, now offices. 1821-2. At the expense of
Prebendary JT Law. Flemish bond brown brick, with pale
headers; grey slate roof.
EXTERIOR: cellars and 3 storeys. Painted stone plinth. No.1
has entrance through Abbey Gateway, Northgate Street (qv),
No.2 has 2 stone steps to door of 4 fielded panels above 2
flush panels with 6-pane overlight in a panelled timber case
with fluted pilasters and a cornice hood. Windows are flush
sashes of 12 panes to first and second storeys and 9 panes to
third storey, having painted stone sills to first and third
storeys and sillband to second storey, all with rusticated
wedge lintels with false keystones. 3 first storey windows to
No.1 and 2 to No.2; three windows to each upper storey of each
house; moulded painted stone cornice, brick parapet and
painted stone cornice; iron rainwater pipe between Nos 2 & 3.
2 visible chimneys.
The rear looks across a narrow enclosed yard to the back of
the buildings on the east side of Northgate Street.
INTERIOR: the cellar to No.1 has front and rear walls of
coursed sandstone, partitions of sandstone not toothed in and
brick, quarry floors, replaced wood stair, some chamfered oak
beams and 2-panel door. First-storey rooms have dado rails and
some cornices, panelled embrasures and some 5-panel doors.
Open-well closed-string stair, 3 turned balusters per step,
newels and straight moulded rails. In the second storey the
south front room has panelled embrasures with architraves and
a simple fireplace. The altered north front room has
embrasures as the southern room and parts of cornice. The
dogleg stair to the third storey has open string, shaped
brackets, stick balusters and simple swept rail. The third
storey rooms have no visible features of special interest.
The cellar of No.2 has peripheral walls of coursed sandstone,
boarded door on gudgeons, 2 chamfered oak beams, replaced
joists, timber steps and a boarded upper door. The
first-storey front room has a 6-panel door, a dado rail,
sub-panels and architraves to embrasure, picture rail and

cornice. The back room has an altered door and blocked
fireplace. A simple dogleg stair with turned newel, stick
balusters and swept rail; shaped brackets to upper flights.
The second storey has two 6-panel doors, sub-panels and
architraves to embrasures, a round-arched fireplace in a
simple surround; cornice. 5-panel doors to 2 rear rooms. The
third storey has 5-panel doors; a fire surround in the north
rear room.
(Burne RVH: Chester Cathedral: London: 1958-).