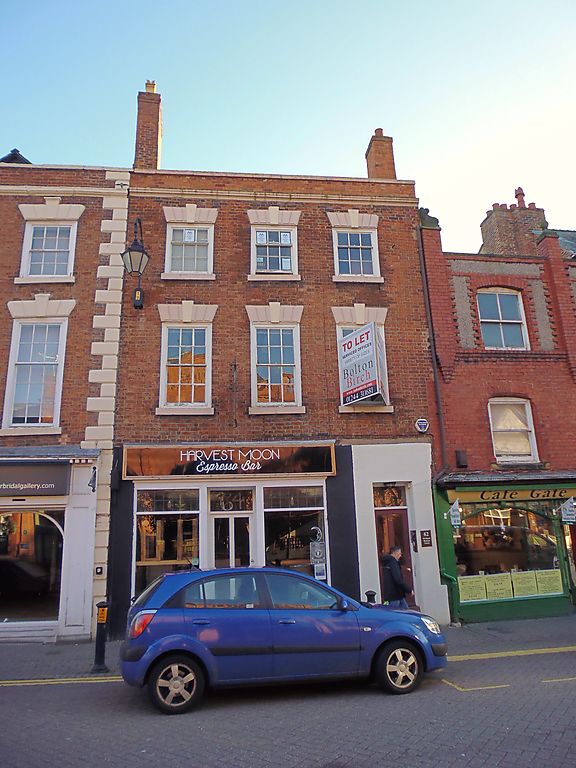 Shop and 2 houses, now cafe and solicitor's office. Mid C18.
Red-brown brick in Flemish bond to front, with grey slate roof
having ridge parallel with the street.
EXTERIOR: the rendered first storey has a replaced door to the
stair and a modern shopfront of no interest. The second storey
has 3 flush 12-pane sashes with painted stone sills and
rusticated wedge lintels, perhaps false, which have dropped
keystones; the third storey is similar, but with 9-pane
unequal sashes; moulded cornice beneath a 5-course brick
parapet with a plain stone coping; a chimney before the ridge
at each end and one behind the ridge at the north end. The
rear faces an inaccessible yard.
INTERIOR: the cellar, parallel with the street, is approx 6 x
3.5m. The rock-cut walls to the front and back are approx
1.25m high, but rising higher towards the ends of the brick
barrel vaults, with some masonry and brick walling above the
bedrock. The main vault has a cross-vault running back approx
one metre in the north half. To the front there is a
barrel-vaulted rock-cut chute near the south end and 0.7m from
the north end a flight of heavy stone steps, formerly giving
direct access from the street, but now blocked. Brickwork at
the end of the cross-vault and in the rear wall further south
suggest that cellars may have extended further east, but if so
are now blocked. The cellar is probably older than the
building above. The first storey has no visible features of
interest. The stair is replaced in the original well which has
a small fixed light in the south gable, concealed from
external view; the main second storey room to the front has a
full-width basket archway with panelled pilasters and lattice
panelling to the intrados, a similarly decorated beam further
forward, a fireplace with moulded shouldered architrave, an
eared overmantel panel and 2 tiers of side cupboards with

fielded panels to their double doors. Other rooms have a
painted chamfered beam, corner chimney breasts and a cupboard
with fielded-panels to doors on 'H' hinges.