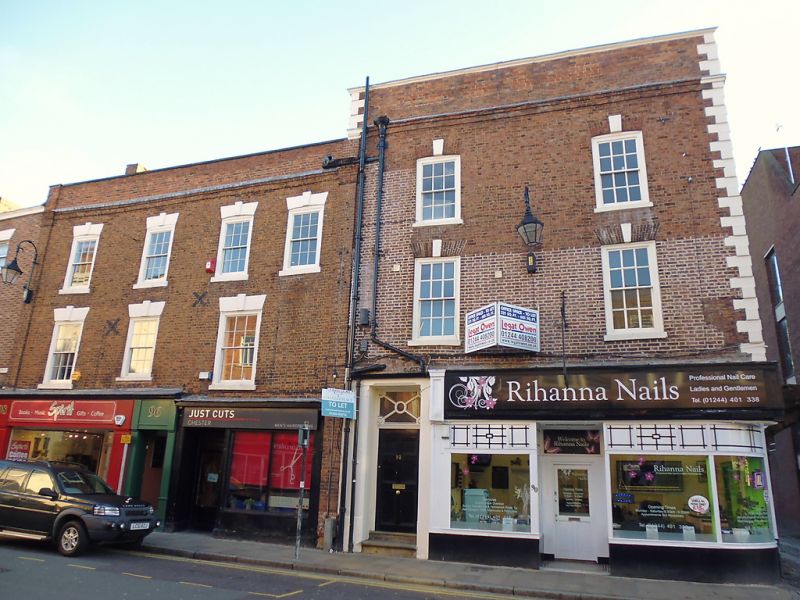 Probably designed as 2 town houses and shops, now 3 shops and
offices. Mid C18. The frontage of Nos 90 & 92 is expressed as
one town house, Nos 94 & 96 as the other; the exteriors of the
2 are described separately, but the interiors overlap.
EXTERIOR: Nos 90 & 92 are of brown brick, in Flemish bond to
the front and south and English garden wall bond to the rear;
the sandstone wing wall to Little Abbey Gateway (qv) forms the
lower part of the rear wall of No.90 and probably the plinth
to its south end; grey slate roofs with main ridges parallel
with the street. 3 storeys. The shopfront to No.90 is probably
inter-war with recessed quadrant pane to the south-west
corner, central recessed doorway a pattern of panels above the
shop windows and panelled end-pilasters. The door to No.92 has
6 panels with an overlight having a central circle and saltire
bars; boarded fascia. The south-west corner of the upper
storeys has painted stone quoins, the stretcher side of each
stone being flush and the header face projecting. Each upper
storey has 2 flush 12-pane sashes with painted stone sills and
gauged brick heads with keystones. The south end has a similar
window to the second storey and an opening blocked in brick to
the third storey. A band of one projecting course, one
recessed course and 2 successively projecting courses beneath
a 12-course parapet with moulded stone cornice; stone quoins
to the north end of the parapet.
Nos 94 & 96, a little lower than Nos 90 & 92, are expressed as
one wide-fronted 3-storey town house, with 2 later shopfronts.
The early C20 shopfront to No.94 has a stone plinth, a
recessed door with a large glass panel above 2 shaped panels,
pilasters and a blind-box. The shopfront to No.96 is of no
interest. Brick end pilasters to the upper storeys. The second
storey has 3 flush 12-pane sashes with painted stone sills and

keys to gauged brick heads, the central one smaller and with a
higher sill. The third storey has four 12-pane sashes similar
to the sash to the second storey. A band of 2 separated brick
courses with a flashed oversailing course at the base of a
10-course parapet with a plain stone coping; coped north gable
with a ridge chimney.
The rear to No.90 is blank. No.92 has a 2-and-a-half storey
canted rear bay with a former basement doorway now a 2-pane
window with a rendered apron, a tripartite sash of 4;12;4
panes to each of the first and second storeys under a lean-to
roof and to the third storey in the gable above. No.94, in the
recess between the canted bay of No.92 and the rear wing of
No.96, has a door of 4 fielded panels above 2 flush panels, a
flush sash of 12 panes to the second storey and a 9-pane sash
to the third storey. The gabled rear wing to No.96 has a
16-pane recessed sash to the first storey and to the second
storey and a 9-pane sash to the third storey, all with stone
sills and segmental brick heads; in the south side a 3-pane
basement window, a bricked-up opening to the first storey and
a recessed 9-pane sash to the third storey; 2 small inserted
windows in the north side. Only the third storey is visible
north of the rear wing, with a flush 12-pane sash.
INTERIOR: the basement is largely C18. 3 stone steps within
the hall. The room behind the entrance has 3 moulded
plaster-faced beams and a cornice; a door of 6 fielded panels
to the rear north room; a plain 6-panel door; stair in closed
well to second storey; the second storey front south room has
an altered door in a case with heavy architrave, part of a
moulded cornice, a stone fireplace and a cast-iron safe,
probably late C19; panelled case to 6-panel door to rear room.
A rear room has a 6-panel door, cornice and a marble fireplace
with mantel on slender Roman Doric pillars; cupboard with
architrave to door of 6 fielded panels; rail to landing has
turned newels and column-on-vase balusters. The stair to the
third storey has closed string, newel with turned central
portion, 2 turned balusters with square plinths and caps.
Doors of rooms on the third storey which were unoccupied and
could not be inspected have 4 fielded panels. The attic stair
is similar to that to the third storey, but with square
newels.
Parts of the interior could not be inspected.