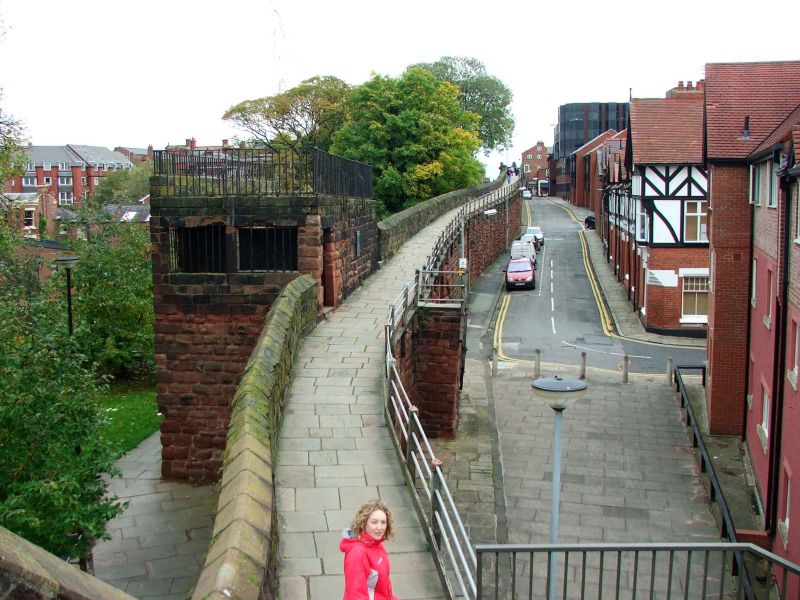 Rectangular watch tower and possibly emplacement for Civil War
cannon. 1640s. Red sandstone coursed rubble. The tower is
rectangular. The chamber has a pair of barred openings with
chamfered square divider of stone, facing west and a simple
opening facing north. An L-shaped stone stair with 2 flights
of 5 stone steps leads to the roof which forms a viewing
platform which has a stone parapet surmounted by a simple iron
railing, with an L-shaped stone bench at its north-east
corner.
HISTORICAL NOTE: originally called the Raised Square Platform,
this item is said to have been named Morgan's Mount after
Capt. William Morgan or his son Edward, supposed commanders of
the Royalist garrison during the Civil War.
(Collens: Cheshire Sites and Monuments Record: 3007/2/5;
Bartholomew City Guides: Harris B: Chester: Edinburgh: 1979-:
85; The Buildings of England: Pevsner N & Hubbard E: Cheshire:
1971-: 155; Cheshire Sites and Monuments Record: Collens J:
Chester City: 3007/1/2).