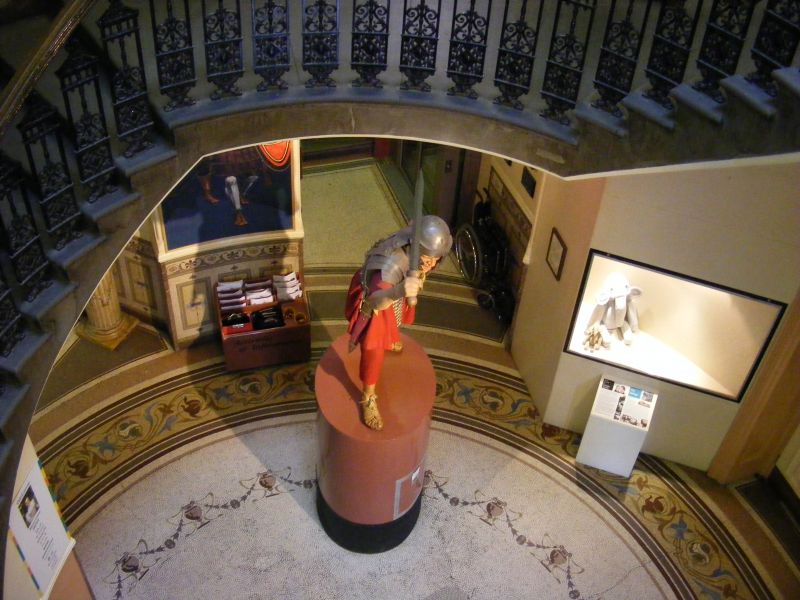 Museum. 1885. By TM Lockwood at expense of the first Duke of
Westminster. Stone-dressed Ruabon red brick with steep
red-tile roof.
EXTERIOR: basement and 3 storeys; in TM Lockwood's manner,
opulent. Plinth with band; 2 basement windows east of door and
2 to west. The round-arched entrance, east of centre, has 3
stone steps to landing with wrought-iron double gates, then 4
steps to glazed double doors and screen. The elaborate
doorcase has composite pillars, that to west inscribed THIS
STONE WAS LAID BY THE DUKE OF WESTMINSTER FEBRUARY 3RD 1885;
ornate moulded voussoirs and key; a Muse in each stone
spandrel, one with a palette, the other with globe and
compasses; ornate 2-panel frieze with Grosvenor and Chester
City arms and date 1885, three stone-dressed cross-windows
west of entrance and 2 transomed 1-light windows to east;
stringcourse above lintels. The second storey has dentilled
floor-string, 3 cross-windows west of the entrance, 3 separate
rectangular lights above the doorcase and two 1-light
transomed windows east; a stringcourse above the lintels
carries the plinths of composite pilasters. The third storey
has 3 cross-windows with double transoms west of the entrance.
One above the entrance in a projecting panel on an ornate
corbelled plinth; 2 double-transom 1-light windows, east;
corner oriel on ornate stone corbel; swag frieze and dentilled
cornice; necked gables above entrance bay and central window
in west wing, each bearing a stone eagle about to take flight.
The oriel terminates as a tourelle with a cupola roof
characteristic of Lockwood. The very steep hipped roof behind
the entrance and east bays is of 2-storey height with one
lucarne in the lower storey, 2 in the upper storey and a short
ridge with finials and an octagonal lantern cupola.
INTERIOR: a round archway on polished granite columns with a
smaller arch, on a corbel, to each side leads to a circular
stair-hall having mosaic floor with armorial centrepiece;
mosaic dado; the raked lecture-theatre, west, has 3-panel
ceiling with cross-beams on consoles and dentil cornices. The
gallery, east, has moulded frieze and dentil cornice to coved
ceiling. The lobby behind the stair-hall leads to the Georgian
House, No.20 Castle Street (qv). The front room west of the
entrance hall could not be inspected; the east room has an
ornate fireplace and overmantel, carved window-arrises and
cornice. Geometrical stone stair with mosaic dado rises in 4
flights to second and third storeys where the rooms could not
be inspected; the half-drum above the stair has pilasters
carrying arched radial trusses beneath a rooflight.