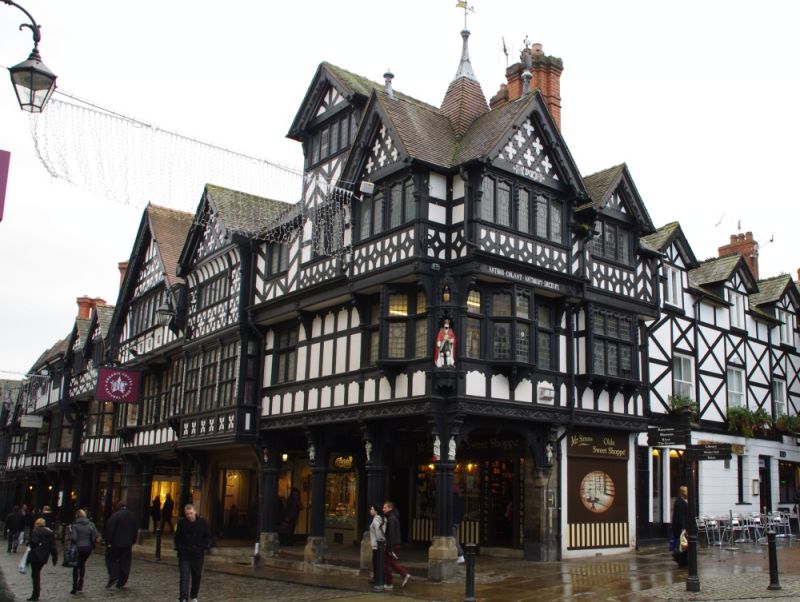 Undercrofts, offices, shop and public house. Some medieval
stonework in undercrofts; the Dublin Packet facing Town Hall
Square is probably early C19, altered; the frontages to
Northgate Street were rebuilt 1902 by John Douglas, then
senior partner of Douglas and Minshull. Sandstone, timber
frame with plaster panels, stucco and brick with roofs of clay
tiles and slate.
EXTERIOR: cellar undercrofts, 3 storeys and a small attic. The
east front to Northgate Street has a timber arcade of 3 bays
with posts on sandstone plinths to the Row storey, 2 steps
above pavement level; the square posts have moulded corners
and a shaft with carved bell-shaped capital in C13 manner on
every side; each arch has 3 crockets; niches above the
capitals contain carved figures, 3 in Elizabethan costume
playing instruments, one with hands removed and the 2 above
the corner post holding scrolls inscribed, with reference to
the effigy of Edward VII above, THE KING HIMSELF IS SERVED BY
THE FIELD and THE PROFIT OF THE EARTH IS FOR ALL. Shaped
brackets support the carved jetty-beam of the second storey
which has 2 rails, shaped lower and upper panels, a 2-light
mullioned and transomed leaded casement to No.29, a 4-light
leaded oriel with moulded mullions and transom to No.31 and an
ornate canopied niche at the corner with Town Hall Square
holding a half-size effigy of Edward VII, robed and crowned
and bearing the orb. The third storey, jettied on shaped
brackets, has herringbone and quadrant-braced panels, two
2-light casements, one having an ornate mullion and blank
tracery in a bay carried upwards to the attic storey which has
a 5-light casement and a jettied gable with shaped brackets,
shaped bargeboards and a carved finial; No.31 has a 4-light
leaded casement to the third storey with a colonnette at
centre and at each side, the outer ones carrying a jettied
gable with quatrefoil panels, shaped bargeboards, a lead
finial and, behind, a fleche with a lead-clad finial bearing a
gilt weathervane.

The north front of No.31 to Town Hall Square carries through
the motifs of the east front, with a sandstone pier at rear of
the Row arcade, a 3-light canted mullioned and transomed oriel
with leaded glazing and flanked by sidelights, and a square
3-light oriel, both ornate, to the second storey. The third
storey jetty-beam on shaped brackets, bearing the Chester City
motto ANTIQUI COLANT ANTIQUUM DIERUM (The elders worship the
Ancient of Days) supports two gabled bays, that towards the
corner, east, having a 5-light leaded casement, a tie-beam
dated 1902, quatrefoil panels and colonnettes carrying shaped
bargeboard brackets and that to the west smaller and simpler
with a 3-light leaded casement and a king-post truss.
West of No.31 the main front of the Dublin Packet is of 3
storeys. The first storey is faced in banded stucco with a
narrow boarded door having iron hinges and furniture, windows
with round-arched main panes of 1-, 2-, 1- and 4-lights and a
replaced door in a recessed porch. The rear wing has an early
C20 brick first storey. The upper storeys are timber-framed,
with plain St Andrew's Cross bracing on the main front. The
second storey has 3 near-flush 4-pane sashes to the main front
and a canted oriel to the rear wing. The third storey has 3
half-dormer 2-pane casements to the main front, a jetty in the
rear wing with a canted oriel and a jettied end gable. The
Dublin Packet Public House forms a pleasant, modest foil to
the lavishly detailed adjoining work by John Douglas.
INTERIORS: the 2 deep undercrofts are square; the sandstone
north-south wall at the rear of the west undercroft is
medieval; the south wall has the springing for a barrel vault.
The stair and some doors to upper storey rooms facing
Northgate Street are by Douglas; the upper storeys could not
fully be inspected.
Nos 5-31 (odd) are collectively known as `Saddler's Row' and
were previously listed as Row numbers.
(Improvement Committee Minutes: Chester City Council:
1900-1903; Chester Rows Research Project: Harris R: Northgate
Street: 1989-).