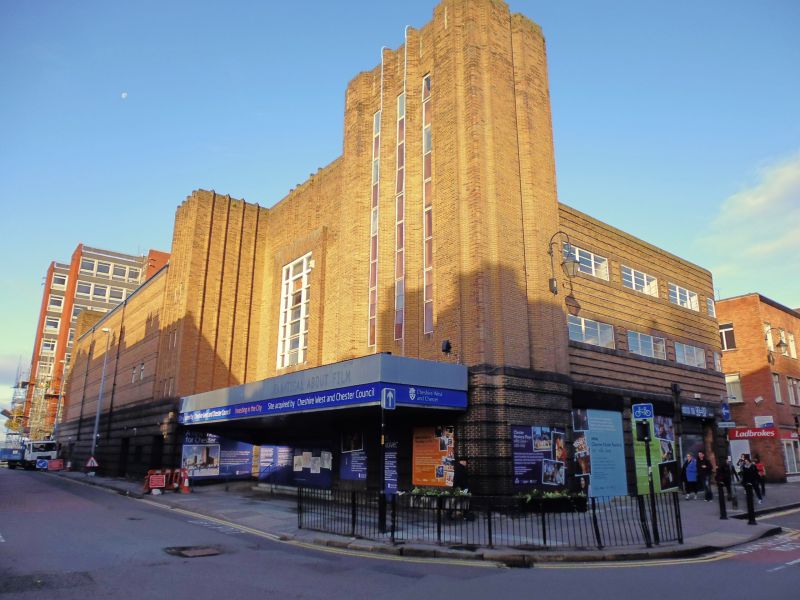 EXTERIOR: on a prominent corner site, the entrance, foyer and
south side of the auditorium are to Hunter Street and the
shops with two storeys of ancillary rooms above are to Northgate
Street. The fronts to both streets are of blue brick with
banded rustication to entrance canopy level, and largely buff
brick above. A tower at the street corner one storey higher
than the rest of the building and towers at both ends of the
auditorium have shaped vertical ribs; the south face of the
auditorium has raised brick bands above canopy level,
surmounted by the glazed tile roof between the false towers.
The entrance and foyers, between the corner tower and the
auditorium, has four pairs of plain glazed double doors, a canopy
with programme advertisements and a tall window to the upper
foyer of seven rows of three panes in a raised brick panel. The south
side and west end of the auditorium each has two pairs of exit
doors; three tiers of triple 3-pane windows in the false tower
west of the foyer; three tall narrow windows of seven panes in the
Hunter Street face of the corner tower. The shops, one in the
corner tower facing Hunter Street and four facing Northgate
Street, have modern shop fronts of no interest. Each of the two
upper storeys to Northgate Street had four horizontally
proportioned windows of three lights of three broad panes.