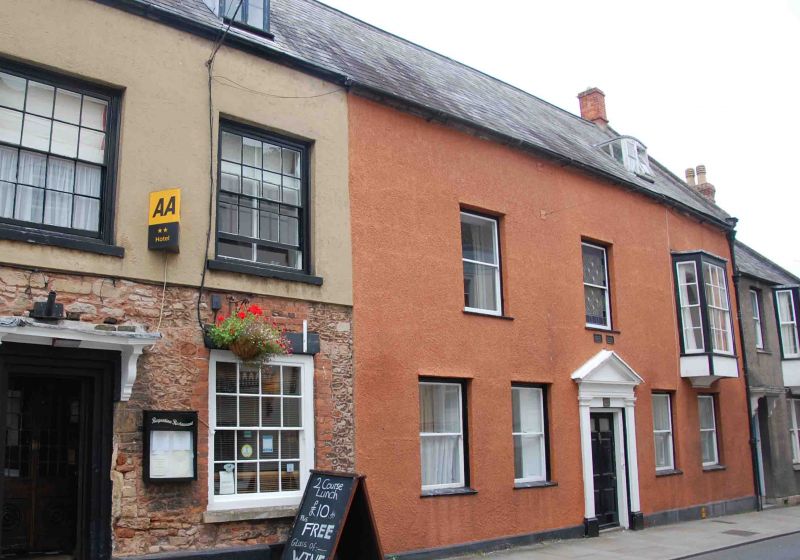 House in short row. 1451, with C18 internal remodelling and
C19 facades. Local stone, roughcast, Welsh slate roof with
continuation to north, coped gable to south, brick chimney
stacks.
EXTERIOR: 2 storeys with attics, random fenestration. Plinth,
central 6-panel door with timber doorcase having Doric
pilasters and entablature, with 2 plain sash windows on each
side of ground floor level, first floor has 2 plain sash
windows, one centred over left window and one over front door,
and centred over right-hand pair of windows an oriel window
with 4+12+4 pane sash units, under a flat roof. Above this
last a dormer with segmental curved roof having a 2-light
casement window and glazed cheeks.
Rear elevation to Cathedral Green similar, but with
triple-roll clay tiled roof, and one chimney stack set on a
stone base, the ground floor has a C20 glazed door with
fanlight to left, then a triple unit plain sash window, with
wider centre unit, above are two 4-pane sash windows set at
different levels, and in roof is a pitched roofed dormer with
a 4-pane sash window. Traces of a medieval stone string
course, pierced by first-floor windows.
INTERIOR: the entrance hall has a chamfered crossbeam, and
fielded 4-panel doors, north-west ground-floor room has a
4-panel ceiling with C15 moulded beams, C18 dado panelling and
window reveals with shutters, the south-west room has a 4
unequal-panel ceiling with chamfered crossbeams without
runouts, with C18 window reveals and shutters, south-east room
similar, with one chamfered ceiling beam. Staircase has turned
balusters and newels with knob caps, probably 1760/80, under
which is a blocked 4-centre arched doorway in the spine wall
(formerly the medieval churchyard wall).
On the first floor, the north-west room has a 2-bay ceiling
with C15 moulded beams, and a later C18 fireplace, other rooms
have plain chamfered beams, but the south-west room has a
2-bay ceiling with C18 mouldings added, the south-east room
has a C18 cornice and fireplace.
At attic level, the rear room has a C18 door and a chamfered
crossbeam, the front attic has a 5-bay arched collar-braced
trussed roof with 2 ranks of purlins, the lower rank having
curved arched windbraces to most bays, most timbers chamfered.
This house and that to the north (No.20 qv) form part of the
1451 "new Works" of Bishop Beckynton (Scrase); see Market
Place (qv)
(Town and Country Planning Working Papers: Scrase AJ: Wells: A
Study of Town Origins: Bristol: 1982-: 59).