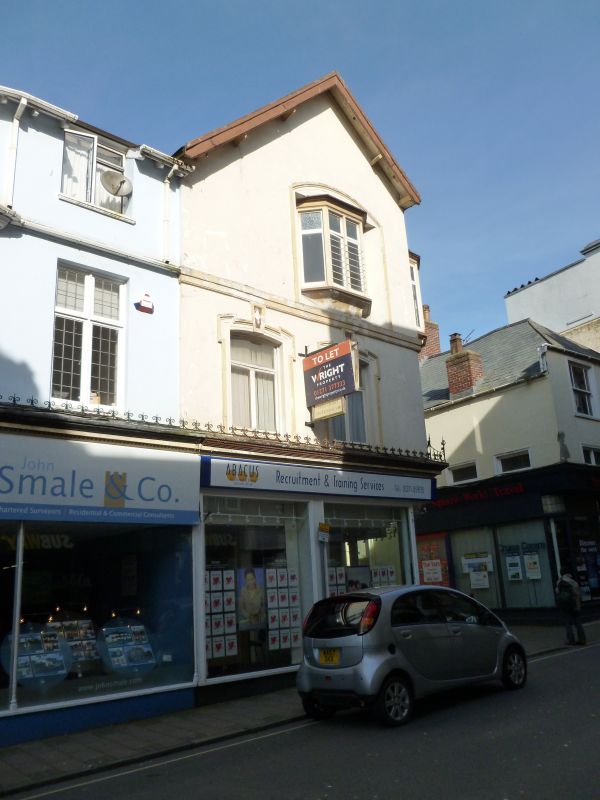 House, now offices and hairdresser's salon. C19, incorporating
a C16 or C17 house at N end. Solid, rendered walls, probably
of brick and stone; rear gable of front part is slate-hung.
Slated roofs, except for the C16 or C17 part fronting Paige's
Lane, which has pantiles on the rear (W) slope. Red brick
chimneys on rear gable of wing of C19 building and on left (W)
side wall of C16 or C17 building.
Plan consists of 3 parts. At the front is a mid or late C19
range with an early or mid C19 rear wing fronting Paige's
Lane, behind that again is the C16 or C17 range, with a
parallel range of similar date alongside part of it to the
left (W).
Front part 3-storeyed, remainder 2-storeyed. 3-window range to
Cross Street, the right-hand window placed on the slightly
inset splayed corner. Ground storey has late C19 shop front
extending on to part of Paige's Lane frontage; entablature
with dentilled cornice. 2nd-storey windows have eared
architraves, the left-hand pair with keyblocks. Raised band at
2nd-floor level. 2 canted bay windows in 3rd storey, that to
left set in a segmental-headed recess. Front finished with a
gable, made lop-sided to fit the splayed corner.
Return front to Paige's Lane has a window in each of ground
and 2nd storeys, the lower one blocked. Rear wing to right of
this is 3-window range. To left of ground storey is a large
early or mid C19 shop window with 3 rows of 12 panes; flanking
pilasters and entablature. Sashes in upper storey.
C16 or C17 range to right has a similar shop window, but with
3 rows of 10 panes and no pilasters; to left of it 2 windows
of similar date with fixed 9-pane sashes, a transom-light
having been inserted into the left-hand window. C20 door at
right-hand end. Upper-storey windows all C20.
INTERIOR: the C19 building has little of interest, but the C16
or C17 ranges retain early roofs and probably other features
at present plastered or boarded in. The E range, adjoining
Paige's Lane, has a 5-bay roof with 4 arch-braces: remaining
trusses are late medieval with cambered collars and slots for
one tier of butt purlins; arch-braces chamfered, with open
spandrels. Existing purlins, also old, lie on the backs of
trusses; feet of trusses and braces cut off and replaced by
C20 wood brackets. The roof may have been re-used, though at
an early date, the storey heights and positioning of the
first-floor beams suggest at least a C16 or C17 building.
Shorter range on W side has doorway with chamfered wood frame
at N end. Roof has plain, old trusses with through purlins.
HISTORICAL NOTE: the front part of No.4 was Corporation
property, leased in 1630 to Edward Eastman, merchant, on
preferential terms in consideration of his spending »40 in
`new building' it. His successor in 1636, Nicholas Cooke, had
also laid out `great cost and charges' in building, but it is
not clear whether this included the earlier parts of the
present building. In 1704 the rooms were listed in detail to
distinguish the freehold from the leasehold parts, and it may
be that the property adjoining the freehold section, the
`little house now or late in the possession of one Leming
Dickingson next on the North parte', was the one with the
arch-braced roof.
The bonded warehouse at the rear of the Paige's Lane frontage,
mentioned in the former list description, has been demolished.
For a view of the lane before this and other demolitions, see
Baxter & Baxter, `Barnstaple Yesterday', plate 114.
(North Devon Athenaeum: Borough records, Leases Nos.160, 384,
373, 271, 390; Baxter J & Baxter J: Barnstaple Yesterday:
1980-: PL 114).