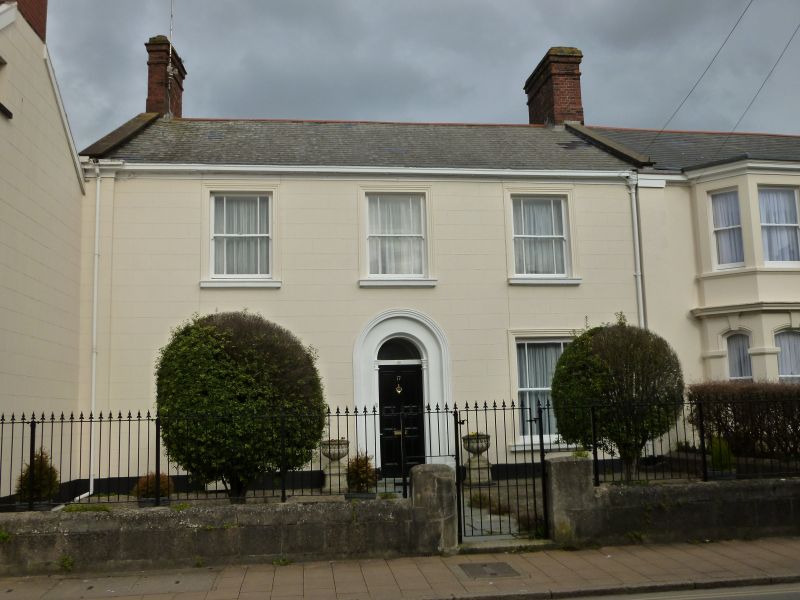 Formerly known as: Litchdon Terrace LITCHDON STREET.
House, now offices. 1821, with minor alterations later in C19
and in 1925. Solid, rendered walls. Slated roof with low
parapets on gable-ends; latter have red brick chimneys with
projecting brick-course and moulded cap forming an
entablature. Double-fronted. 2 rooms deep, with central
entrance-passage leading to rear staircase.
3 storeys. 3-window range. Windows flat-headed with moulded
architraves and cills; later sashes with horns, having 2
upright glazing bars forming margin-panes. Round-arched
doorway recessed within a larger round arch having moulded
architrave. 6-panelled door with knocker, flanked by
pilasters; plain fanlight. Pilaster at each end of front, that
on right shared with No.18 (qv). Moulded eaves cornice.
Several barred sashes in rear wall.
INTERIOR: in 1985 had rooms with moulded cornices, some
enriched, on ground floor. Original wooden chimneypiece in
right-hand front room. Large segmental-arched opening (then
blocked) with moulded architrave, between left-hand front and
back rooms. Entrance lobby had ceiling with groined plaster
vault, the latter with small flower in centre. Passage had
moulded cornice and 2 doors with 6 ovolo-moulded panels.
Staircase rebuilt in 1925 by Mr Thorne of Bear Street; turned
balusters in early Georgian style with Jacobean turned newels.
On left-hand side of back garden was an old cob wall, probably
pre-dating the house.
HISTORICAL NOTE: in 1821 the Corporation leased the sites of
Nos 17 & 18 (qv) to Nicholas Glass, who had 'erected and built
2 good and substantial dwelling houses on the premises .... on
a certain plan and elevation approved of by them.' No.19 had
been 'lately erected' by Philip Hodge of Barnstaple, builder,
who may have built the whole terrace. The lease includes a
plan of the house as existing (allowing for obvious
alterations). The Corporation sold the freehold in 1925. Part
of a formerly uniform terrace including Nos 18, 19 & 20 (qv).
(Barnstaple Borough Records: BOX 19/4; Title Deed).