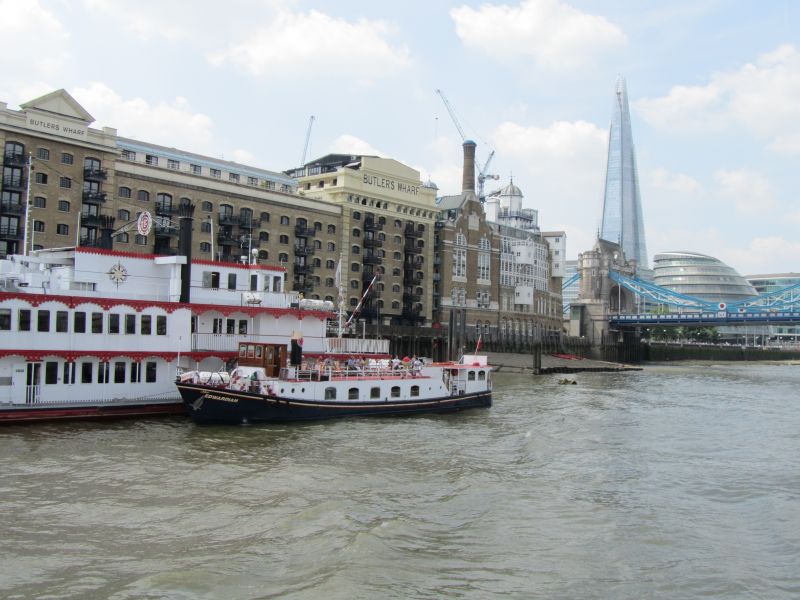 Massive range of warehouses, now in residential and some
office use. 1871-73, probably an enlargement of an existing
block, partly rebuilt after fire damage, restored and rebuilt
internally 1980s. By Tolley and Dale, architects. Stock brick
with white brick dressings and stucco detailing.
EXTERIOR: 6 and 7 storeys with recent attic extensions.
Symmetrical river front elevation designed as a unified
composition has slightly advanced centre piece and end
pavilions of 7 storeys with rusticated quoins, the pedimented
centre piece of 4 bays, the end pavilions of 6 bays with attic
extensions behind giant stucco bracketed cornice, parapet and
block pediment; 12-bay link blocks of 6 storeys with attic
extension behind parapet.
Cast-iron Doric columns to ground floor (possibly originally
open, like a loggia), alternating in threes with brick piers,
except to end pavilions where they are in pairs, all
supporting a substantial iron girder "entablature" carrying
the upper floors.
Piercing the central pavilion is a 2-storey height waggon-way
portico with identical detailing to both river and street
elevations: giant cast-iron Doric columns flanked by pairs of
arcaded windows with dividing column above panelled risers,
and contained by giant pilasters. White brick segmental arches
to windows and 14 hatch ranks (now adapted as balconies) with
bull-nosed reveals.
Street elevation, which is cranked in with the curve of the
road alignment has similar details to windows and 13 hatch
ranks with swivel hoists. Ground-floor openings to street also
have segmental arches. Replica steel gangway bridges at 2nd-
and 5th-floor levels (some with lattice bracing and rosette
studs) link the building with the warehouse range on the south
side of the street, the Cardamom Building (qv).
INTERIOR, which showed unusual variety in methods of

construction and exemplified the transition from wood to iron
in warehouse construction, completely rebuilt except for parts
of Butler's Wharf West (former E block).
When completed, the building was the largest wharf on the
Thames. It remains the largest surviving range of a dockland
'canyon' in its bridged relationship with the warehouses on
the south side of the road.