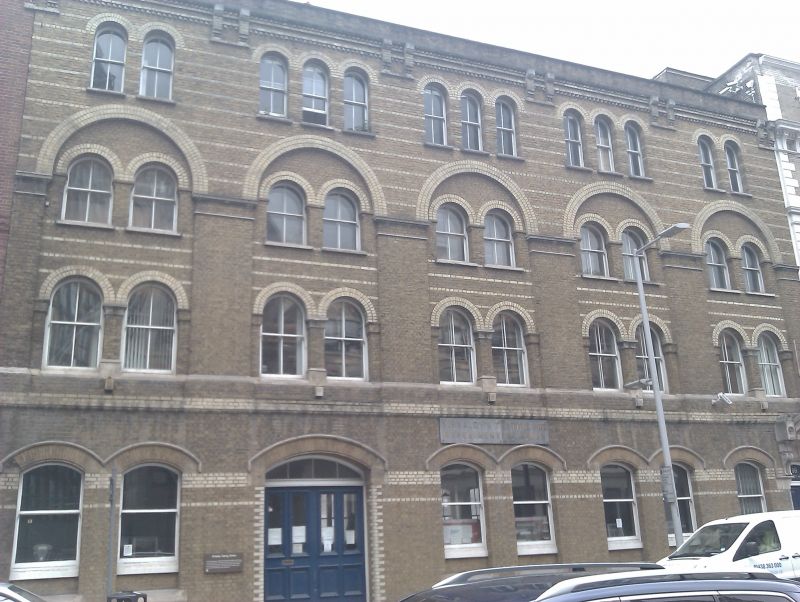 Former materials testing works. Designed by Thomas Roger Smith for David Kirkaldy in 1873. The building contains his hydraulic testing machine of 1863-4 for which it was purpose built. The C20 fittings of the upper floors converted to commercial office space are not of special architectural or historic interest.

Former materials testing works. Designed by Thomas Roger Smith for David Kirkaldy in 1873. The building contains his hydraulic testing machine of 1863-4.
Lower floors opened as a museum in 1984.

PLAN: the building occupies a slightly tapering site between Southwark Street to the north and Price's Street to the south. It is of four storeys plus basement and of five bays.

EXTERIOR: designed in an Italian Romanesque style, the Southwark Street elevation has a dentilled cornice with paired stuccoed brackets surmounted by a low brick parapet. The ground floor has segment-headed openings with stuccoed impost blocks, hood moulds and inset panels below the sills. The door in the second bay from the left has the same treatment with glazed and panelled double doors with transom. Another door on the far right of the building has stucco voussoirs, a heavy bracketed cornice and a pediment with the inscription “Facts not Opinions”.

The rear (Price’s Street) elevation is simpler, again of five bays, each with paired windows except the narrow fourth bay from the left which has loading doors to each of the upper storeys. The windows have plain brick openings, those to the ground floor with segmental heads except the third floor which has round arches. Between the second and third floors is a stucco frieze bearing the legend “Kirkaldys Testing & Experimenting Works”.

INTERIOR AND MACHINERY: the ground floor contains the testing machine which runs the length of the building. The machine, 47 feet, 7 inches (14.5m) in length and weighing some 116 tons, works by applying horizontal compression or tension to the sample, by means of a hydraulic cylinder and ram (originally steam powered but from 1905 electrically powered). As originally designed the machine was capable of exerting a pull of 446.6 tons. The machine is supported on brick piers in the basement, the testing shop’s floor being of timbers which are removable to accommodate various types of test. David Kirkaldy’s office is located in the north-west corner of the testing floor, with the stairs in the south-west corner (a second set of stairs in the south-east corner of the building are modern). The ceiling is supported by cast-iron beams supported on fluted corbels and four cast-iron columns. Along the north side of the building is a travelling crane. The room retains its original doors, sash windows, fitted shelving for tools and matchboard dado panelling.

The basement contains a Denison chain tester for testing marine chains, added by Kirkaldy in 1906. The caretaker’s office and room in the north-west corner retain their fireplace and range. The basement retains its dado panelling, doors and sash windows to the basement light well to Southwark Street. The area at the foot of the stair has original stone flags.

Pursuant to s.1 (5A) of the Planning (Listed Buildings and Conservation Areas) Act 1990 ('the Act') it is declared that the C20 fittings of the upper floors converted to commercial office space are not of special architectural or historic interest.

The engineer, David Kirkaldy (1820-1897), was a pioneer in the scientific testing of structural building materials, particularly metals, and set up the world’s first independent commercial testing house for constructional materials. Born in Mayfield near Dundee, in 1843 he began an apprenticeship at Robert Napier’s shipbuilders in Glasgow, where eventually he became chief draughtsman. In 1858 he undertook tests on wrought-iron and steel specimens for Napier and designed a tensile testing machine. In 1862 he published ‘Experiments of Wrought-Iron and Steel’ after leaving Napier’s in 1861 to establish his own independent materials testing firm. In 1863 Kirkaldy applied for a patent for his proposed ‘universal testing machine’ and in June 1864 ordered its construction by Greenwood and Batley of Leeds. The machine was originally installed at his premises at The Grove, Southwark in November 1865. Amongst the first orders were tests for Joseph Cubitt and Henry Carr on the materials for the new Blackfriars Bridge and on samples from Alfred Krupp, the German steel magnate.

By the late1860s the success of the business meant that larger premises were needed. Kirkaldy took advantage of the completion of the new Southwark Street by the Metropolitan Board of Works in 1864, to have a new works purpose-built on land leased from the Crown Estates at No. 99. The building was designed by Thomas Roger Smith (1830-1903) of 22 Bedford Street, Covent Garden, a noted architectural theorist and academic, and was completed by the end of 1873 when the test machine was relocated. Named Kirkaldy’s Testing and Experimenting Works, Kirkaldy’s reputation for integrity and accuracy in testing many types of constructional materials meant that commissions were undertaken from round the globe. In 1880, for example, tests were carried out on elements of the Tay Bridge which had collapsed in December 1879. Other tests carried out at the works included components for Hammersmith Bridge (1887), Eads Bridge in St Louis (United States, 1874 - at the time the longest arched bridge in the world and the first to use steel as its major component), Wembley Stadium (1923) and the chains supporting the Festival of Britain's Skylon (1951). David Kirkaldy was succeeded as owner by his son William George (1862-1914) and eventually his grandson, David William Henry (1910-1992). In 1965 the works were taken over by Treharne & Davies and testing continued until 1974 when the works were closed. In 1984 the ground floor and basement of the building were re-opened as the Kirkaldy Testing Museum where volunteers maintain the testing machine in working order. The upper floors, which originally housed the 'Museum of Fractures' where test samples were displayed in glass cases (eventually sold for scrap after the cases were shattered by blast damage during World war II), are let as office space.

REASONS FOR DESIGNATION DECISION
The former Kirkaldy Testing Works at No. 99 Southwark Street, Southwark, one of the first commercial materials testing laboratories dating from 1873, complete with Kirkaldy’s testing machine of 1863-4, is listed at Grade II* for the following principal reasons:

* Historic association: David Kirkaldy was important for establishing standardised testing of structural materials in the late-C19. Elements of many important structures and investigations into failed structures such as the Tay Bridge were carried out here;

* Degree of survival: the exterior, ground floor and basement of the building and the testing machine remain largely unaltered.