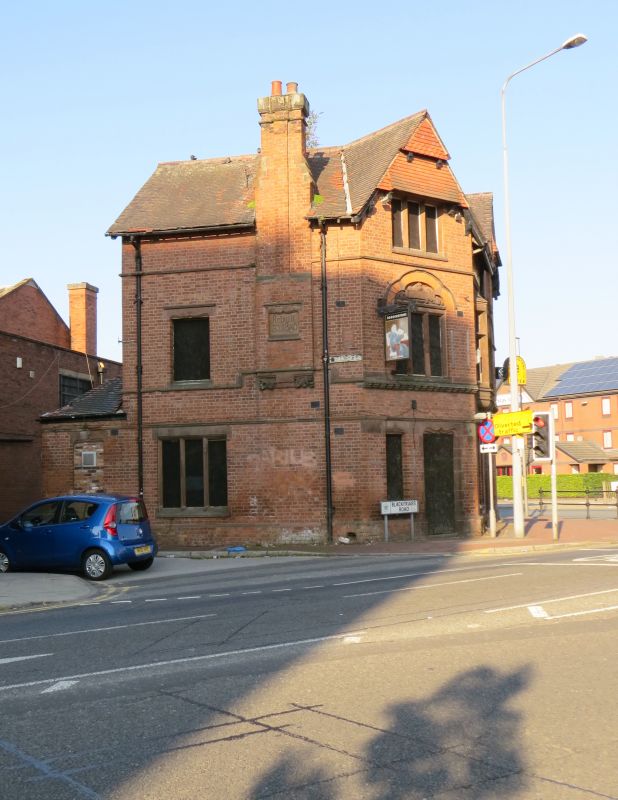 Public house. Dated 1886 on left side; by William Ball of
Manchester. Red brick with red sandstone dressings and some
tile-hanging, slate roof. Vernacular Revival style. Modified
L-plan.
EXTERIOR: 2-and-a-half storeys over cellars, 3 bays, the first
and third gabled; chamfered plinth, 3 string courses,
steeply-pitched gables with oversailing verges, the upper
parts tile-hung with small pentices over the attic windows,
Ground floor has a broad lintel band to the first and second
bays, each of which has an entrance with moulded surround,
flattened ogee head, that in the second bay with a swan-necked
pediment over. The first bay has one window to the left, the
second bay has 2, and the third bay has a tripartite window,
all sashed. At first floor the second bay has a canted oriel
of stone with mullions and transom, and a band on the corbel
with the words: "YOU MAY GO FURTHER AND FARE WORSE"; the first
and third bays have tripartite windows, each with an extrados
of red brick and carved stone tympanum, that to the left
depicting a friar displaying a banner with the words "THE
BLACK FRIAR" and that to the right including a shield with
corn sheaves and bees, lettered below "BLACKFRIARS" "OLD
SCHOOL". The gables of the outer bays have 3-light mullioned
windows; the centre has a flat-roofed 4-light dormer. Left
return wall has a tall chimney corbelled from first floor and
breaking the eaves, with a stone plaque at its base inscribed
"Rebuilt AD 1886".
INTERIOR: some original fittings and plan elements. Entrance
lobby with door to left to vault, ahead door with cut and
etched glass. Hall has altered curved bar and a Jacobean style
stair. Parlour has 2 altered lobby screens, fixed upholstered
seating, bell pushes and fireplace, vault has simple fixed
upholstered seating and a modern opening to remodelled area to
rear.