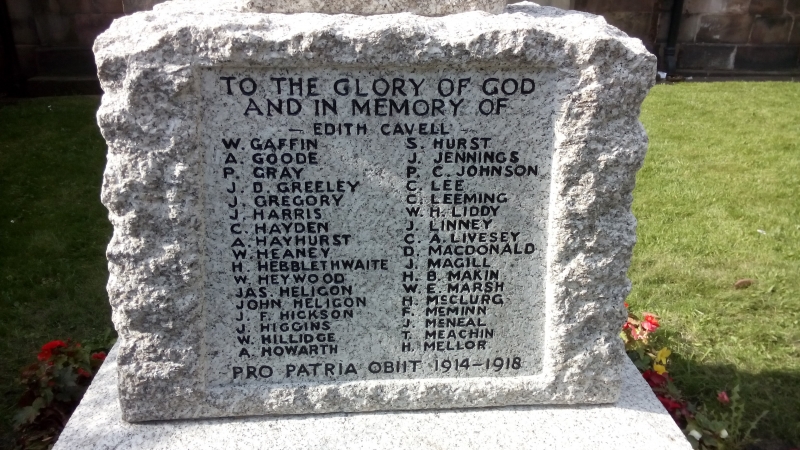 DESCRIPTION: the memorial is located within the churchyard of the Church of the Sacred Trinity (Grade II*). It comprises a wheel-head cross on a shaft rising from a square plinth set upon a two-stepped base. There is a Sword of Sacrifice on the face of the cross head and running down the shaft.

The faces of the plinth have polished smooth panels which bear the names of the fallen as well as the dedication which reads TO THE GLORY OF GOD/ AND IN MEMORY OF/ (125 NAMES)/ PRO PATRIA OBIT 1914 – 1918.

One such memorial was raised at Salford as a permanent testament to the sacrifice made by the members of the local community who lost their lives in the First World War.

It commemorates 124 local servicemen who died during the First World War and one of the most famous civilian casualties of the First World War, Edith Cavell. Cavell worshipped at Salford’s Sacred Trinity Church in the period 1906-7 when she lived in the area and worked at the Manchester and Salford Workhouse under the auspices of the Queen's Nursing Institute. During the war, Cavell became involved in helping allied soldiers caught behind enemy lines to escape to Britain through Holland. She was arrested and killed in August 1915.

Sacred Trinity, Salford War Memorial is listed at Grade II for the following principal reasons:
* Historic interest: as an eloquent witness to the tragic impact of world events on this local community, and the sacrifice it has made in the First World War;
* Architectural interest: a simple yet dignified granite wheel-head cross;
* Historic association: with one of the most famous civilian casualties of the First World War, Edith Cavell, victim and propaganda cult figure;
* Group value: with the Church of the Sacred Trinity (Grade II*) and the Punch Bowl Public House (Grade II).