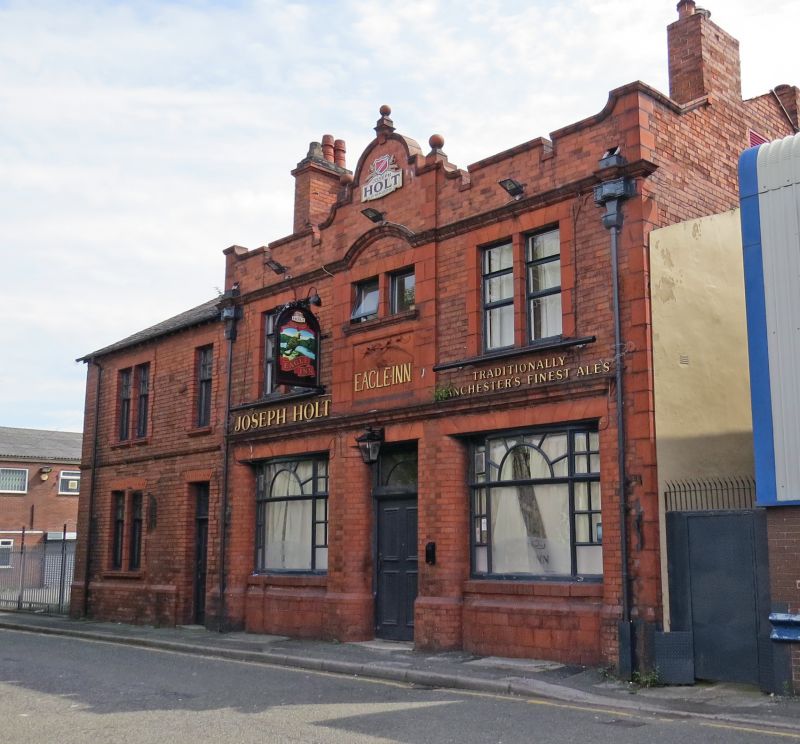 II
Public House and attached dwelling. Dated 1902. Red brick with terracotta dressings, slate roofs with decorative ridge tiles, three gable chimney-stacks. PLAN: L-shaped plan to public house and rectangular plan to dwelling, both fronting onto the street. EXTERIOR: Public house; Edwardian Baroque style. Two storeys over cellars. Deep plinth with chamfered top. Three-bay symmetrical façade with central entrance. Original door, partially glazed with etched glass, set in timber screen with etched glass panels, and semi-circular and radiating glazing bars to overlight. First and third bays have recessed canted bay windows with partially etched glass, and semi-circular and radiating glazing bars to upper part of central lights. First-floor string course. Central bay over entrance projects slightly at first-floor level and has a terracotta plaque of an eagle with name EAGLE INN beneath. Above is a shallow two-light window. The first and third bays have two-light mullioned windows. 1902 date on rainwater head though this may be the date of re-facing of an earlier building. Parapet with shaped-gable centre with ball and finial decoration. Quoins full-height to outer edge, but only at first-floor level on side adjoining dwelling, suggesting that the dwelling may have originally been a single-storey building. Dwelling; Two storeys. Continuation of deep plinth of public house. Door with overlight to right with two-light mullioned window to left. First-floor string course, with two-light mullioned window to left and single-light window above door. INTERIOR: Retains original three room layout. Entrance opens into drinking lobby, with two doors to the right to the parlour and the tap room to the rear. To the left of the bar is a third, larger bar room. The drinking lobby retains a ceramic dado and its original panelled bar counter, with reeded jambs supporting screens with fixed glazing bar lights and semi-circular overlights above the serving hatch. The parlour and large bar room have fixed upholstered seating, picture rails and moulded cornices, while the tap room has a timber panelled dado and picture rail. Other original fixtures and fittings include a small Art Nouveau chimneypiece in the large bar room, moulded door surrounds and panelled doors. The bar counter in the large bar room has been altered. Dwelling interior not inspected.

The Eagle Inn is of special architectural interest as an example of a little-altered late C19 back-street public house, a once common urban building type, but now increasingly rare. It forms a group with the public baths opposite by Thomas Worthington (q.v.). The Eagle Inn retains much of its original interior and, with its integral dwelling, represents the substantial investment made by the local Holts' Brewery in the building and re-fitting of its public houses, in the Salford and Manchester neighbourhoods, with both exteriors and interiors finished to a high standard.