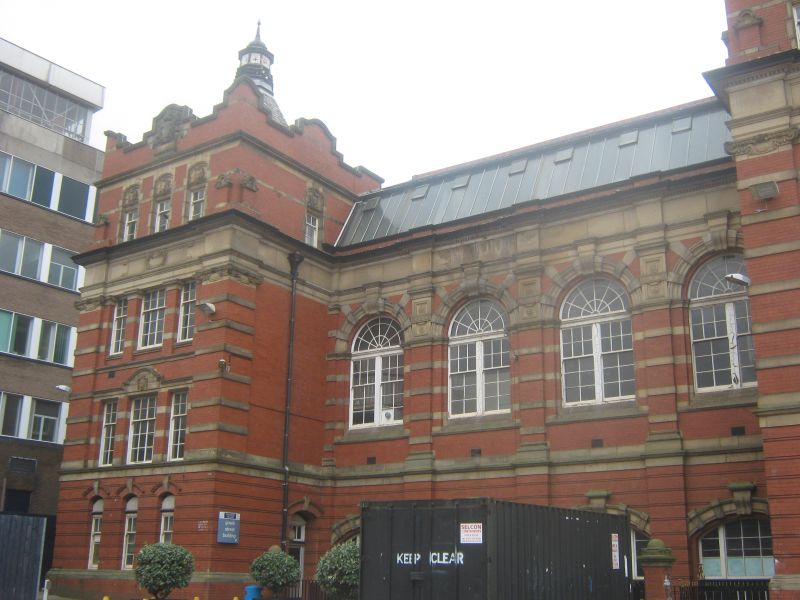 PLAN: Modified U-shaped plan with attached former caretaker's house on its south-west side which has a sub-triangular plan with canted bay. Lower and upper halls in central range flanked by classrooms on three sides with staircases at either end.

Most corridors have terrazzo floors, tiling up to dado level (now painted), and moulded cornices with decorative plaster consoles.

SUBSIDIARY FEATURES: Cast-iron railings, wall, and brick and stone piers to area in front of sunken ground floor on north side of central range.

HISTORY: Designed as a Municipal Secondary School for Girls by Cheers & Smith for the County Borough of Stockport. The same architectural practice also designed a pair of schools for Stockport; Hollywood Park Council School (q.v.) and North Reddish Infant and Junior School (q.v.). In 1970 the school merged with the Technical School, situated to its immediate east, which subsequently became Stockport College of Further and Higher Education. The two buildings are linked by a modern corridor.

The modern corridor on the east side of the Greek Street annexe linking it to the former Technical School, now Stockport College of Further and Higher Education, is not of special interest, nor is the main college building.

REASONS FOR DESIGNATION DECISION
The Stockport College of Further and Higher Education Annexe, Greek Street, is designated at Grade II for the following principal reasons:
* It is a strong representative example of designs for council secondary schools dating from the early C20
* The use of an inventive Queen Anne and Renaissance style gives the building a strong visual impact
* Close attention has been given to the architectural detailing of both exterior and interiors
* The original plan form survives intact with only minor alterations
* There are numerous original fixtures and fittings relating to its function as a school