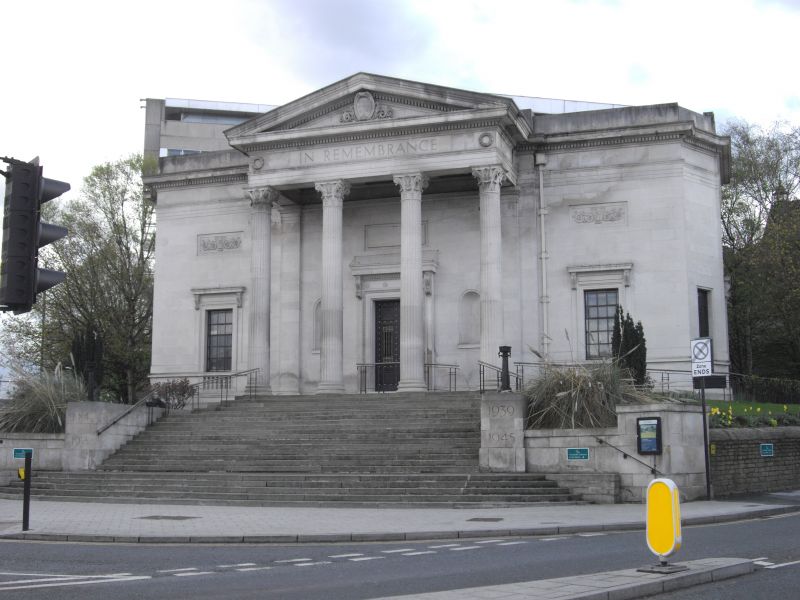 EXTERIOR: Corner location, approximately 4.5 m above road level, approached by a broad flight of 23 steps. Low flanking walls of Portland stone with cast-iron lamp standards and dates 1914 1918 on one side and 1939 1945 on the other side. Building designed in Neoclassical Greek Revival style with central tetrastyle Corinthian portico, the order loosely based on Temple of Apollo at Bassae. Deep frieze carved with the words IN REMEMBRANCE flanked by laurel wreaths, and pediment bears arms of Borough of Stockport in the tympanum. Central entrance has cornice supported on scrolled consoles with paterae in frieze. Wooden double doors with brass paterae and glazed lights protected by brass balusters with Greek key bands. Niche on each side. Ground-floor window on each side with cornices and scrolled consoles, with balustrading supporting the sills. Above are rectangular cartouches of scrolled ornamentation.

INTERIOR: Entrance leads into marble paved hall with a view through to the memorial hall to the rear and a gallery to either side, each screened by a pair of marble fluted Greek Doric columns. Ceilings have plasterwork with Greek key pattern detail. Foyer across centre of building with open-well staircase with quarter landing lit by tall-round-headed window on west side. Staircase has brass handrail and ironwork balusters with wave scroll frieze. Access to late C20 extension on east side of foyer. Memorial hall entered via a screen of two Cipollino marble columns with bronze capitals based on the Tower of the Winds in Athens. Top-lit sail-vaulted hall with saucer dome. Walls lined with Mazzano marble with white marble plaques recording the names of 2,200 dead of World War I, with further marble plaques added to commemorate dead of World War II and later conflicts. Skirting and frieze of green Tinos marble, marble paved floor, and four corner bronze pedestal lamps. Large sculpture of white marble set back from centre of hall and framed by apse. Life-size figure of Britannia draped with a flag, holding a sword of honour and a wreath, with the figure of a young man at her feet kneeling upon a shield which is crushing a serpent.
Landing on first floor from which memorial hall can be viewed through an open lunette with low ironwork balustrade with brass antefixes with anthemion motif. Landing has deep anthemion plaster frieze and a small glazed dome. Picture gallery runs full width of front of first floor, top lit (now blocked) with paired columns at either end and ornate door surround with acroteria and paterae. Wooden fielded panel double doors.

SUBSIDIARY FEATURES: Site bounded along the street frontages by a stone retaining wall which related to the grammar school formerly on the site. Plaque on Wellington Road South records the site of the grammar school. Wall returns to site of Stockport College of Further and Higher Education where it returns. Inset at this point are foundation stones recording previous buildings of the Technical School which stood where the college now stands.

HISTORY: The idea for building an art gallery was current in 1912, but it was not until 1919 that it was resolved that the war memorial for Stockport should combine a commemorative sculpture, memorial hall and exhibition gallery. The site was donated by trustees of the late Samuel Kay J.P. Initial estimates put the cost of the building at around £30,000, revised to £22,000 by 1923, with the final cost being £24,000 of which £2,100 was for the sculpture. The money was raised entirely by voluntary subscriptions. In 1921 James Theodore Halliday, the architect, put forward the names of Gilbert Ledward, William Dick Reid, Frederick J Wilcoxson, Jack Millard, and John Cassidy as possible sculptors for the memorial. The committee, with advice from the distinguished war artist Francis Dodd, chose the design of Gilbert Ledward. The building's foundation stone was laid on 15 September 1923 and it was inaugurated on 15 October 1925 by Prince Henry, George V's son.

The late C20 single-storey curved extension on the east side linking gallery to college to its rear is not of special interest.

REASONS FOR DESIGNATION DECISION
The War Memorial Art Gallery is designated at Grade II* for the following principal reasons:

* The art gallery provides a perfect subordinate setting for the war memorial sculpture, complimenting it and forming a greater whole
* The architectural quality of the building is emphasised by its design, which clearly acknowledges both its setting and its dual use as memorial and art gallery
* High quality materials are used throughout and the craftsmanship with which these materials are treated endows the building with a quiet decorative enrichment
* The Memorial Hall is a dramatic space given a quasi-religious atmosphere, with a sail vault and saucer dome, in the manner of Hagia Sophia, and apsidal wall behind the sculpture, perfectly reflecting the need for quiet reflection
* The poignant memorial sculpture provides a focus for the grief and remembrance of a local community, who paid for this fine memorial building entirely through public subscription
* The striking sculptural group was designed by a nationally renowned sculptor, who designed a number of war memorials including The Guard's Division Memorial, Horse Guards Parade, and won a competition for this commission
* The degree of alteration to the original building is minimal and the modern single-storey extension does not impact upon the main exhibition spaces or Memorial Hall
* The building forms a group with the Town Hall (q.v.), Stockport Infirmary (q.v.), and two shelters (q.v.) set in its boundary walls