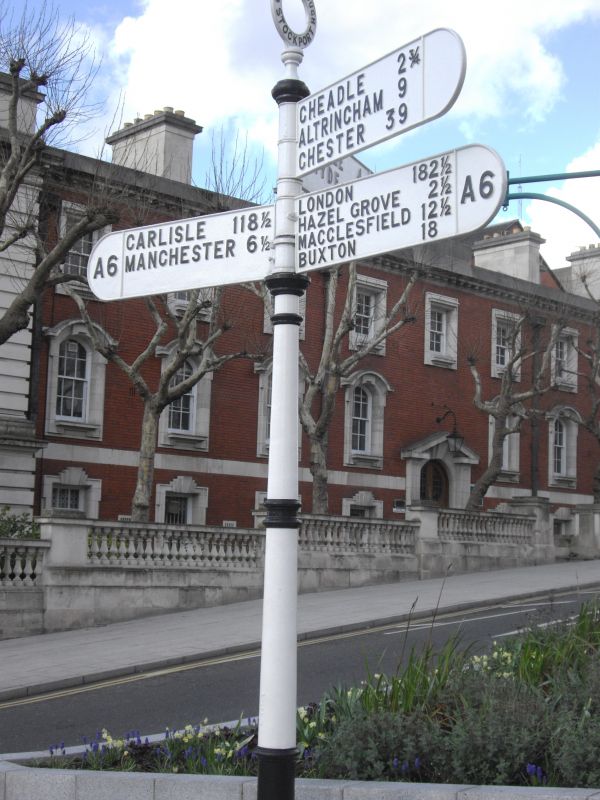 HISTORY: Stanton Ironworks Company was a principal manufacturer of guideposts during the later C19 and early-mid C20. The guidepost is post 1888 as Stockport became a County Borough that year. It is likely that it dates from early-mid C20; the adjacent Town Hall opened in 1908.

REASONS FOR DESIGNATION DECISION
The Edward Street/Wellington Road South guidepost is designated at Grade II for the following principal reasons:
* It is an intact and unaltered example of an early-mid C20 cast-iron guidepost with four `fingers'.
* It is located in a prominent position in the Town Hall Conservation Area and stands adjacent to the front elevation of the Grade II* Town Hall (q.v.), and in close proximity to four Corinthian capitals (q.v.), the former Stockport Infirmary (q.v.), the Grade II* War Memorial Art Gallery (q.v.), and the Wellington Road South and Greek Street shelters (q.v.).
* This functional piece of municipal design illustrates the civic pride of the late C19 County Borough of Stockport by implying that it was situated on a direct route to London in the south and Carlisle in the north.