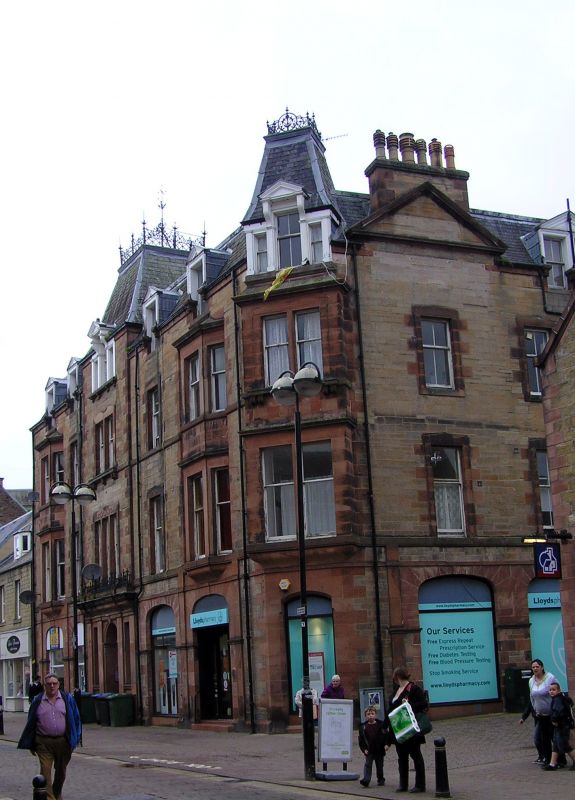 INTERIOR: access was not gained to the interiors at the time of resurvey (2005). However, the mosaic floor in the stair hall with the Galashiels crest suggest other features may survive.

The Douglas Hotel is an imposing building and one of the most prominent in Galashiels Town centre, making a significant contribution to the main commercial street in the town, with features of particular interest, such as the French detailing to the roof. The hotel, which retains many of its original features, demonstrates the continuing rise in the fortunes of the town through the later 19th century.

The building is the work of J and J Hall, the foremost and most prolific of Galashiels architectural practices, whose work defines much of the late 19th and early 20th century character of Galashiels town centre. The firm, which had premises at Ladhope Vale, had its origins in the building firm of Robert Hall and company in the mid-19th century. John Hall Junior became an architect in the 1880s, when the firm became known as J and J Hall. Other notable buildings by the firm in Galashiels include the Technical College (1908) and the Co-op buildings on High Street (1888).

The hotel includes the 3-bay return to Douglas Bridge. This does not appear to be the entire hotel as built. Early maps and photographs show that there were at least 3 further bays to the lane now known as Douglas Bridge. These bays, which were faced in rubble, were removed in the later 20th century. The hotel also included a long wing extending to the rear from the northwest of the hotel, probably a service wing.

The ground floor openings were previously bipartites recessed within the existing depressed arches. The work to open these out was probably related to the conversion of the hotel into apartments.