Church Of Our Lady And St Andrew, Market Street, Galashiels 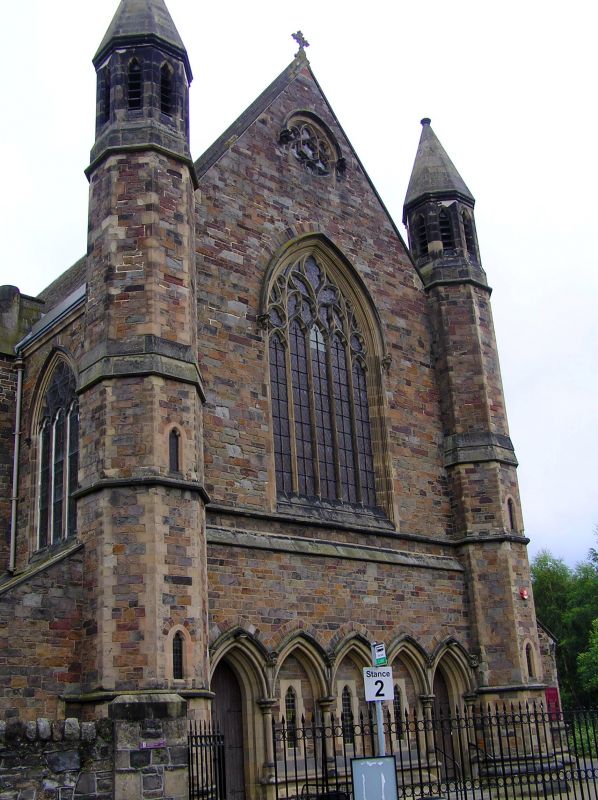 Ecclesiastical building in use as such. Our Lady and St Andrew's Church is a good example of a later 19th century Catholic church, the only one in Galashiels, monolithically massed and in a commanding position at the top of Market Street. The church has good exterior stone detailing and a good painted decorative scheme to the interior.

A chapel and school had been erected in the earlier 19th century on the same site (slightly to west) on land gifted by Mr Hope-Scott, descendent of Sir Walter Scott. The chapel however soon became too small and the site next door was purchased with the intention of building a new church. The church was built in 1856 opened in 1858 by William Wardell (1823-1899), but was not completed until the Goldie and Childe extension of 1872. The pulpit and alter rails were added in 1870.

In 1873 the church was enlarged with the addition of the Lady Chapel and St Patrick's Chapel to the NW. The baptism font was gifted by Mr Earp of London in gratitude for the church caring for his son after a serious fall when he had been working on the high altar.

The earlier primary school to the NW was demolished in 1989 to make way for the new Ladhope Vale bypass road, which has resulted in the church being isolated form the rest of the street. A comprehensive restoration scheme was carried out in 2005.