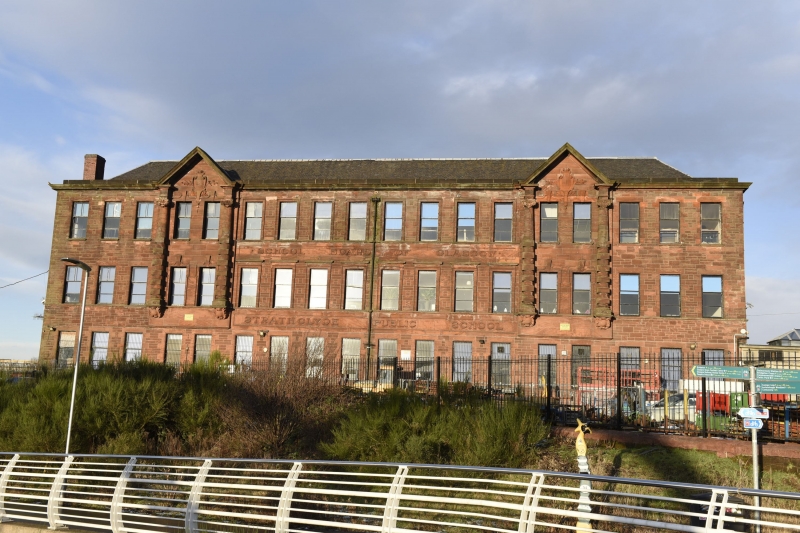 S ELEVATION: central 8-bays with inscription SCHOOL BOARD OF GLASGOW and STRATHCLYDE PUBLIC SCHOOL. Flanking pair of aedicule frames rising through 1st and 2nd storey with part-banded columns above decorative corbels and with shield motifs in apices. Rear elevation to N with advanced 6-bay gabled wing with round-arched window to upper storey.

This is a good example of a former Glasgow Board School with decorative detailing and a fine south elevation adding significantly to the streetscape of the area. Bridgeton was a highly populated area and this is reflected in the fact that it has a number of Board Schools, many of which survive. Most Board Schools followed a similar pattern of large municipal buildings with numerous windows to provide the necessary light and air to the classrooms. There were usually separate entrances for boys and girls and this separation was usually continued internally in the form of separate staircases.

The Education (Scotland) Act of 1872 made education compulsory for children between the ages of 5 and 13. Existing schools were brought under the management of the newly elected School Boards and new schools were built to accommodate the larger numbers of pupils. Glasgow employed leading architects of the day to design their Board Schools, leaving behind a rich architectural legacy in the city.

James McKissack, circa 1875-1940 was a Glasgow-based architect who went into partnership with his father in 1900. He designed a number of public buildings in his early career, but after his father's death in 1915, he concentrated his work mainly on cinemas.

The school closed in 1979. It is currently the Strathclyde Business Centre (2010).