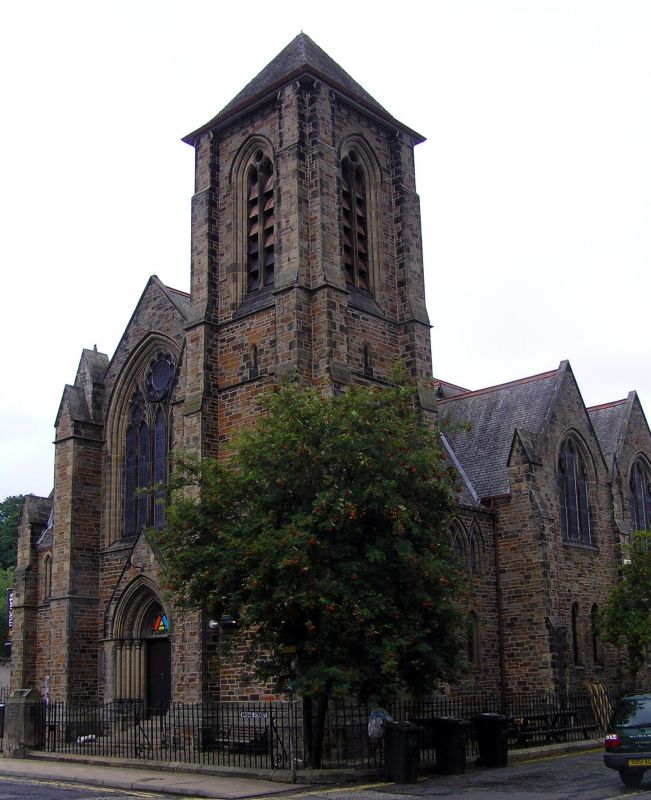 St Andrew's parish church is one of the most prominent churches in Galashiels. The church makes a significant contribution to the townscape, situated as it is on a prominent corner close to the centre of the town. Although the spire of this church has been reduced to a stump, the building is well detailed and unusual for the prominence of the corner tower. Much of the interior detail is obscured, but the church appears to have a good quality collection of stained glass. Some stained glass is known to have been carried out in 1909 by Douglas Strachan, one of the Scotland's best-known stained 'glass artists of the early 20th century.

The church is built in the distinctive freestone used throughout Gala, although usually on rear elevations of houses. The stonework includes both whinstone and a type of sandstone with a distinctively high concentration of metal oxides, which produces an attractive and unusual polychromey.

This church replaced an earlier church built for the congregation at the end of Island Street in 1844 (still extant although considerably altered). In 1883 it was resolved to build a new church at Bridge Street, on the site of gardens belonging to some of the houses on Bridge Street. The new church was opened on 1st October, 1885.

The original intention was to face the church in polished ashlar, but freestone was later chosen to reduce costs. The church was built by Robert Hall and company, Galashiels. The hall to the rear of the church appears to be of the same date as the main body. However, the smaller hall at the north corner dates to the early years of the 20th century.

The spire was removed in the 1980s, when the church was closed.

J McKissack and W G Rowan were a prominent practice of the later 19th century, prolific church designers who designed in a multitude of styles as demanded. Most of their recorded work was on the west coast.