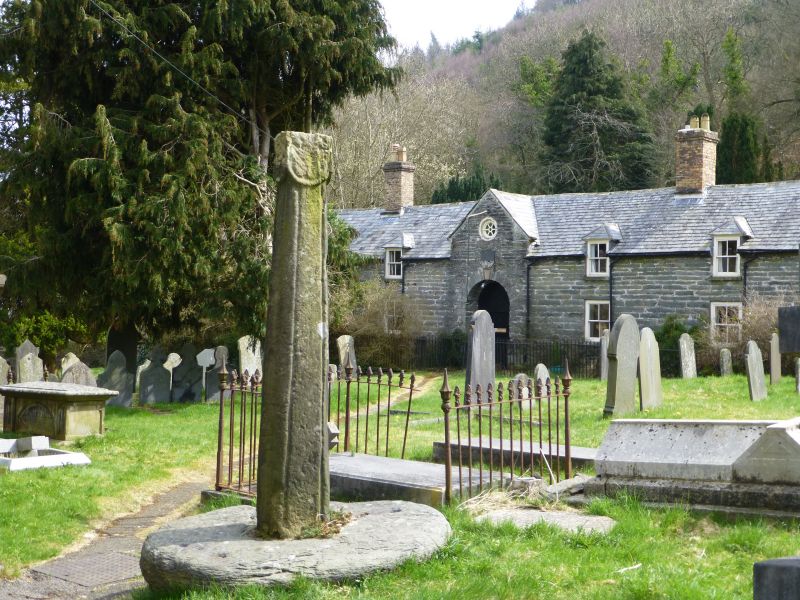 Location: In a churchyard of roughly circular form behind the street frontages.

The earliest reference to a church here occurs in 1222. The nave and chancel appear to be the earliest parts of the fabric, and are probably C13. Transepts were probably added later (a S transept was subsequently demolished), and the present tower is probably also secondary, though it may have replaced an earlier tower, perhaps in the C14. There is evidence that the nave itself was built in 2 phases, as there is a clear straight-joint immediately E of the porch. The church underwent major restoration in 1777, when new windows were installed, a plaster ceiling inserted, the N porch added and the N transept repaired. A further restoration took place in 1871, with Benjamin Ferrey as architect and W.E.Samuel of Wrexham, builder. The S transept was removed and the S aisle added; the chancel was repaired and the early lancet windows in the E wall which had previously been blocked were re-opened; the other windows were all replaced. The early roof was exposed and repaired. A plaque in the porch records that this work of enlargement and improvement was carried out with the aid of a grant from the Incorporated Society for Building and Churches. The vestry to the S of the tower was added in 1898, and the tower was restored in 1907.

West tower, nave with north porch and transept, and S aisle; chancel. Rough random rubble to nave, porch, transept and tower, the later S aisle and rebuilt N gable of transept a better coursed stone. Slate roofs with red tiled cresting throughout. Undivided W tower with small doorway to N, clock above, and simple angular tracery and slate louvres to 2-light bell-chamber windows. Embattled parapet. Chamfered arched entrance to N porch inserted c1871. There is a rough monolith (traditionally known as 'the pointed stone in the icy nook') incorporated into the E wall of the porch. Broad foiled lancet to its W, and 2-light plate-traceried window to the E. Similar plate-traceried window in gable of transept, which has lancet windows in its E and W walls. Narrow lean-to S aisle has 4 triple lancet windows, and a gabled vestry projecting from the chancel with paired lancet windows. Chancel is high to accommodate to the sloping site: it has 2 plate-traceried windows to N and S of 1871, and 3 lancets to E, which are said to be early C13 though they have been recut. Traces of an earlier window (possibly of the C18 restoration) are visible high up in the N wall.

Nave and transept: 4-bay S arcade of c1871: cylindrical piers with stiff-leaf capitals carry strongly projecting square abaci which support the unchamfered pointed arches. Double chamfered arch to N transept also dates from the restoration, as does the chancel arch, which is double chamfered and sprung from stiff-leaf corbels. The nave roof was repaired during the restoration, but is substantially nave roof was repaired during the restoration, but is substantially C17 - 1 truss is dated 1687: the 3 western trusses have kingpost and raking struts to collar, with quatrefoils in the spandrels, and cusped pierced tracery between the principal posts. The 2 easternmost trusses are slightly different: the easternmost truss has kingpost and collar, with arched braced cusped struts, and pierced quatrefoil panels between king post and struts. The other eastern truss has king post, queen struts and arched braces, and is also enriched with pierced quatrefoils, and trefoiled cusping to either side of the king-post. Additional cusped collar to the east, close to the E wall of the nave. A screen separates the N transept from the nave: delicate enriched Perpendicular tracery and vine-scroll frieze. It was given as a memorial to members of the Walker family when the transept was turned into a lady chapel in 1931. Transept extensively restored, but it retainsan early roof, with curved principals and struts to collar, and twotiers of wind-braces.

Other fittings: Wall Memorials, including Maria Charlotta Lloyd, d.1780; marble; a draped urn with pointing putto superimposed on an obelisk surmounts the inscribed tablet - by Vander Hagen of Salop; Captain William Hans Blake, d. during the Ashantee War in West Africa, 1874. The tablet is inscribed with a detailed biography, and is surmounted by a low-relief cross and anchor: by Caffin and Co, Regent Street, London. Stained glass: E window by Clayton and Bell, 1871; N nave window in a Burne-Jones style, dated 1920. Font: C12: a simply shaped basin on a cylindrical base with cable moulded band; font canopy is a First World War memorial.

A good example of a multi-period town church which retains substantial medieval and sub-medieval fabric, and which has some fine fittings.