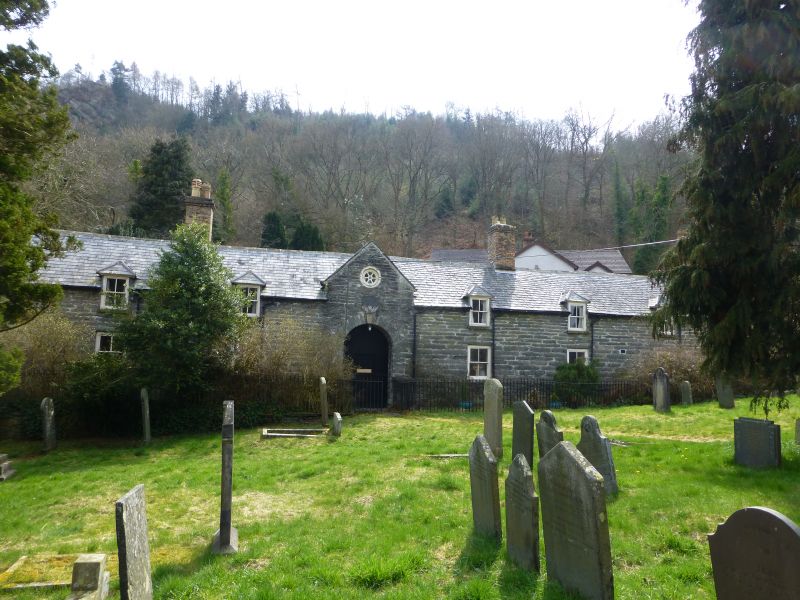 Location: At the rear of the churchyard.

Established in 1750 by William Eyton of Plas Warren, Shropshire, as almshouses for the widows of Merioneth clergy. Reputedly, the site has earlier origins as an ecclesiatical collegiate foundation, although these are not documented. Originally 6 dwellings. Converted into 2 houses in 1938, and now in single occupation as a retreat centre.

Roughly coursed rubble with high plinth; slate roof with yellow brick gable end and axial stacks. Symmetrically planned about a central entrance, originally laid out with 3 dwellings to either side, facing inwards. Advanced gabled entrance bay with high segmental archway to gateway, with inscription stone above. 3 x4-pane sash windows aligned with similar windows in hipped dormers in the roof to either side of the entrance. Courtyard elevation originally set out with 3 single unit dwellings to either side of the entrance: Left hand range has blocked outer doorway, the 2 surviving doorways have timber gabled porches. 4-pane sash window to left, and canted bay window (a later addition) to the right. Similar porch to inner doorway of right hand range, with canted bay window, 4-pane sash window and blocked door to right. Lean-to porch added in angle with single storeyed cross wing which forms the E boundary of the compound, and which was formerly the bakehouse. It is balanced by a low toilet block to the W.

The original C18 internal layout survives substantially intact with small modifications consistent with changing use: each of the original dwellings had a single room on each floor: chamfered spine beams in lower rooms, deep fireplaces (some blocked), with stairs winding in the angle of the chinmney breast (some now removed).

Part of an important group of buildings around the churchyard, Coleg y Groes represents an excellent example of a C18 almshouse building, retaining much of its early character.