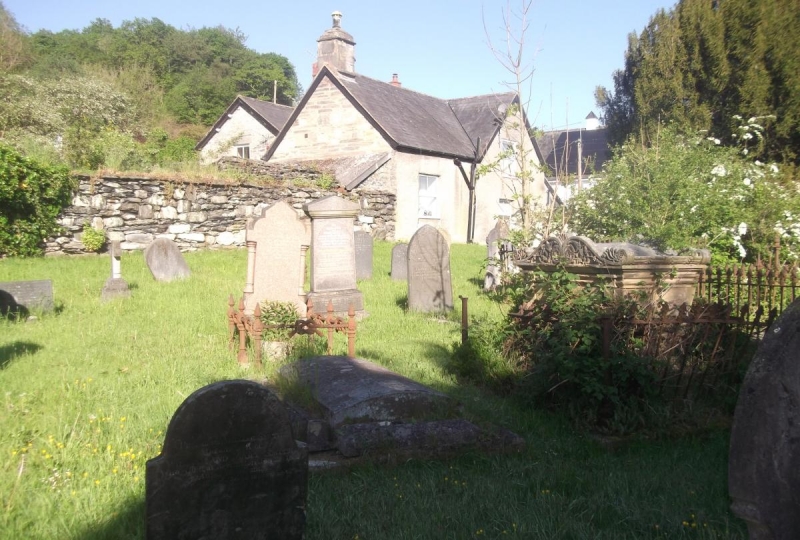 Location: Surrounds the Church of St Mael and St Sulien, set back behind High Street.

The churchyard was presumably established when the church was founded, at least by the early C13. Of roughly circular form, the churchyard is bounded by the building line of High Street to the N, enclosed by rough rubble walls elsewhere, with the buildings of the College forming part of the S boundary. The churchyard contains a rich sequence of grave stones, including several groups of late C18 headstones towards the SE, some late C18 slab tombs with head and footstones, and early C19 chest tombs. One tomb adjacent to the S wall of the chancel, with a slab carried on Mannerist bulbous shaped legs, may be C17. Most of these earlier memorials are of slate, which was also used for many of the later C19 stones which are largely to the SW and W of the churchyard. A number of these are enclosed by ornate cast iron railings, and in addition to the head stones and chest tombs, there is a mid C19 obelisk and an ornate sarcophagus with bronze inscription plate dated 1856. On the E side of the path leading to the N doorway of the church is a series of 'kneeler graves', in which low upright stones have grooves said to be cut to support the knees of kneeling mourners. These stones have been recorded at several other locations in the area, and appear to be a local feature. Their dates are no longer legible, but were recorded as 1771 and 1810, when noted in a local guide book in 1902.

The churchyard is important as the setting for the medieval church, and is exceptionally rich in memorial stones spanning from the late C17 to the late C19.