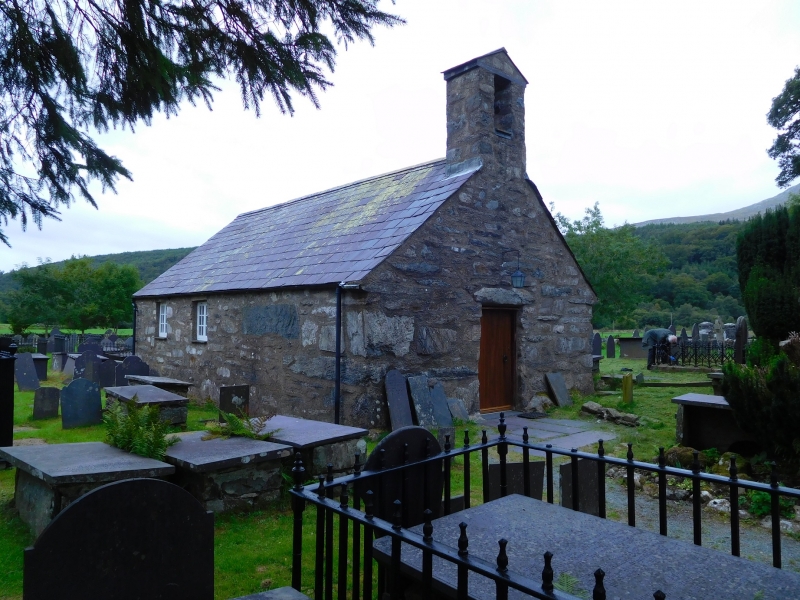 Location: Situated immediately W of the A 4086 (Capel Curig to Caernarfon road), on the S bank of the Afon Llugwy; approximately 300m NE of Plas-y-Brenin (the National Recreation Centre).

An early site, the church was originally dedicated to Curig Lwyd and eventually to Cyriacus and (his mother) Juliet. During the Middle Ages it belonged to the Priory at Beddgelert; until 1848 the church formed a chapelry in the parish of Llandegai and was administered by the incumbant of Dolwyddelan. The present structure is probably C13 or C14, with a later S chapel, perhaps of the C15; all current openings, together with the bell-cote are C19. The church is the smallest and most vernacular in the district. It was described by a traveller in 1836 as being `scarcely larger or more commodious than a bathing machine' and he advised that `the church extension commissioners should take a microscope and look at it.'

Small L-shaped church of `double-square' nave and chancel plan, with added S chapel. Rubble construction, partly on a boulder plinth and incorporating some especially large stones, particularly at the corners. Out-of-character modern raised cement pointing; traces of former render are noticeable throughout. Plain late C19 slate roof with crude kneelers to the primary section and slightly finer ones to the S chapel. Blocked primary N entrance with shallow, low segmental arch to cyclopean slate-stone lintel. To the L are two 12-pane casement windows. 16-pane casement E window with a 12-pane window as before to the E wall of the S chapel, at L. Above the former window a slight raising of the roof line is discernable; further 12-pane casements to the W side of the chapel and the S wall of the nave. Blocked medieval window to S gable; of primitive lancet-type with slate-stone arch and reveals. Plain rectangular bell-cote with square bell opening and flate modern slate capping. Recessed modern oak door to W gable, with square frame and flate stone lintel. There is early scratch graffiti to the L of this entrance and also to the L corner of the S gable.

The church is set in a picturesque rubble-walled churchyard with mostly C18 and C19 tombs, including a group of railed Victorian grave plots.

Included at Grade II* for its Medieval origins.