A Grade I Listed Building in Barmouth (Bermo), Gwynedd 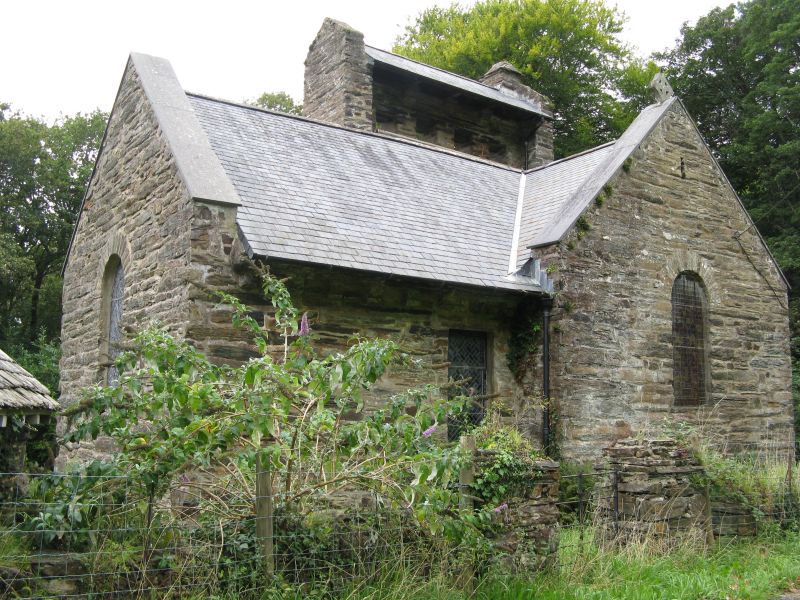 Location: At the end of a steep lane off the A 496 between Barmouth and Bontddu. Dramatically sloping churchyard.

Built in 1862 for the Rev W E Jelf to the designs of the Rev J L Petit. Rev Jelf was an academic and orthodox high churchman who had acquired the Caerdeon estate in 1854, and commissioned the building of a church in the grounds of his house to provide a place for English language worship. In particular, Jelf wished to cater spiritually for his Oxford undergraduates who came to Caerdeon for classics tuition. His successful petition to the Bishop of Bangor for a licence to use the church in this way was challenged by the Rector of Llanaber (in whose parish it lay), as there was a legal obligation to hold services in Welsh in Welsh speaking areas.

The rector brought Jelf before the Court of Arches and was successful, but the situation worsened when the Bishop of Bangor, introduced a bill into the House of Lords to enable services to be conducted in English in Welsh speaking areas provided certain conditions were met. This became the English Services in Wales Act of 1863, passed as a direct result of the building of this church. As a result of the dispute, the church was not consecrated until 1875. It has been suggested that the transepts, vestry and bellcote were somewhat later additions, but watercolours by the architect show the building substantially complete by July 1862. Jelf died in 1875, and the estate was purchased by Samuel Holland, MP for Meirioneth. The church remained a private patronage until 1920.

Jelf’s choice as architect for the church was his brother in law, the Rev John Louis Petit. Petit was a notable writer on architecture, who travelled extensively across Europe and beyond in pursuit of his studies. He had published a book ‘Remarks on Church Architecture’ in 1841, in which he expressed an openness to architectural ideas from many sources (including continental) which put him at odds with advocates of a strict gothic revival, and in particular with the Ecclesiologist, which described him as `a clever amateur' in 1863. Caerdeon is almost his only known building (though he probably had a hand in the design of his own house, Bumblekyte, Upper Longdon, Bedfordshire (dem). He was also a prolific artist, and indeed documented the construction of the church at Caerdeon in a series of watercolours which are now in the National Library of Wales.

The church at Caerdeon is a highly individual building that does not fit easily into the usual classifications of architectural style. It is a highly imaginative exercise, drawing on a wide architectural knowledge and for a patron who was not seeking to conform to established church building practice. This church reflects the general rustic influence of upland Mediterranean areas and exhibits `picturesque appropriateness' (Ecclesiologist), but at the same time it fits perfectly into the N Wales landscape using local materials and local traditions. However, it has been more variously described as Alpine, or of French Basque church influence or like an Italian farm building, and the Ecclesiologist was not complimentary about it, describing it as `something between a large lodge gate and a lady's rustic dairy', presumably because it did not adhere to the principles of correct gothic espoused by that journal.

Despite this, for its date it is an important building in British terms and can be regarded as a remarkably early example of a vernacular or rustic church, offering an early challenge to the orthodoxies of the gothic revival.

Asymmetrical cruciform plan with aisle-less nave, lean-to loggia entrance to S, chancel, S transept and opposing vestry. Rubble-slate construction; rough plinth, stone coped gables and strongly over-sailing eaves carried on bold corbels. Slate roofs, only the nave retaining the original graded slates. Plain round-arched windows to transept and chancel, and segmental window to the vestry wing; oculus to liturgical W end with a square-headed window to S side of nave. Stone flagged terrace in front of entrance loggia; this with deep rustic corbelled cornice carried on 2 square piers. Within, stone benches and paired round-headed windows in Romanesque manner. Large 6-panelled door, raised and fielded, with enormous ironwork hinges; above, an inscribed tablet dated 1896 in memory of Jelf and also of Petit and his wife, Emma Gentille Petit. Over the crossing a massive 4-part bellcote with book-end like piers, one of which includes a chimney stack; this is of special interest for its mechanism, contained in an open lean-to to the N corner between the vestry and chancel, which enables all the bells to be rung from a wheel-operated single rope. The chancel gable apex is dated 1862, though this part of the church is a later addition.

Included at grade I for its special architectural interest as a highly unusual and distinctive church for its period, boldly original in its style and relationship with its landscape. The church is the only surviving building by its architect, J L Petit, who was a prolific writer on architecture, and an artist of architectural subjects, and it gives clear expression to his views, which provided a counterweight to the prevailing orthodoxies of the gothic revival. The building is also of historic interest for its controversial role in Welsh ecclesiastical history.