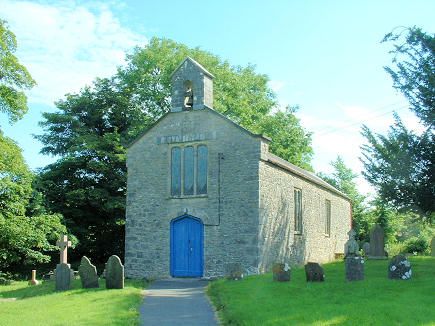 Location: In hamlet of Lower Nash, 1 km SE of Cosheston Church. Reached by a side road N of the A477 road.

The church was rebuilt on earlier foundations, 1841-2, by George Gwyther, architect, of Pembroke Dock. It was repaired in the 1890's but retains its early C19 arrangement virtually intact. The parish is closely connected to Upton, and there are Tasker and Neale graves in the churchyard and memorials within the church.

There is no marked division into nave and chancel. There is no chancel arch, and the plain plaster ceiling is continuous from end to end. At the W is a gallery with a handrail on turned balusters, above a small internal porch. The vestry is at the N reached under stone archway. Rough stonework is exposed at the reveals of the E window. Plain coloured glass throughout. Box pews.

Listed as an important example of a pre-Ecclescological Movement C19 church, retaining most of its original character.