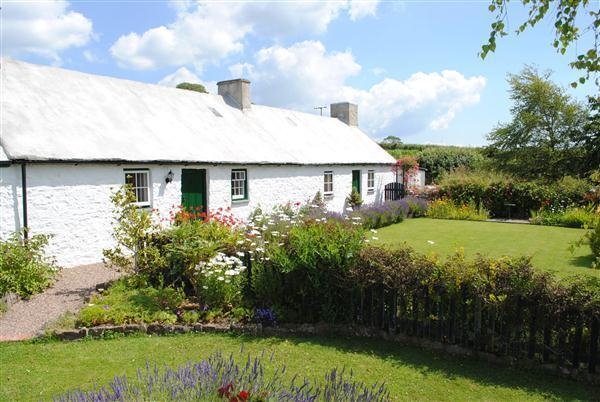 Location: 1 km E of Cosheston village. From the unclassified road to Paskeston it is reached by a track to the S.

This original Mayeston consisted of a pair of similar cottages probably of late C18 date. They faced S towards two very large vegetable gardens with a shared central path. The building remained two cottages until 1922. It was part of the Leach Estate, and the tenants in 1840 and 1850 appear to have been Richard Llewellyn and David James, a small farmer and a cottager. The pair was formed into one farmhouse in 1922. The right cottage (E) became the dwelling part. The right cottage underwent moderate adaptations but the left cottage was not altered, so it retains many original features. The building remained a farmhouse until 1978.

Random local stone rubble, heavily encrusted with limewash. Slate roof rendered on both slopes. Large stone chimneys at gable ends, with capping, and a small later chimney centrally. Each of the original cottages is of two units, single-storey, and has two windows facing S towards the vegetable gardens. At the left is a small dairy extension with its door to the rear. From left to right, the windows of the front (S) elevation consist of a fixed light of four panes, an original sash window with a three-pane sash above and a six-pane sash below, and two four-pane sash windows. The door of the left cottage is of three vertical boards, that of the right cottage is a replacement boarded door. Iron-sheeted sheds and a small extension at the rear.

Listed as a fine vernacular structure which was recently two cottages with many important surviving features and an exellent S elevation.