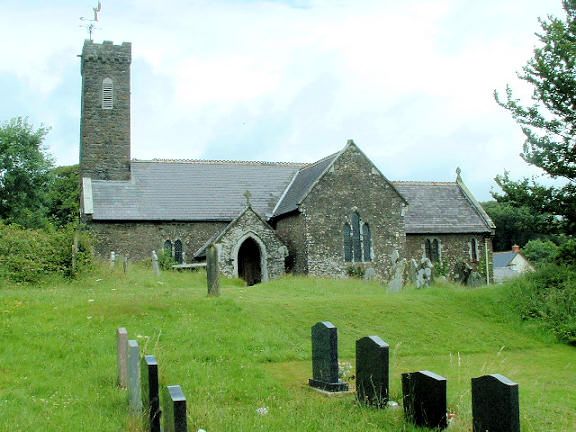 Location: At the W edge of the village of Cosheston. The churchyard is to the S of the street and surrounded by stone walls.

St Michael's Church is first mentioned in 1291. In several C19 restorations it was virtually rebuilt. Lewis in 1842 refers to the church as a 'neat modern structure, in the Early style of English architecture', and in the main rebuilding of 1885 the Early English style was again consistently followed.

Nave with small W tower, N aisle, chancel, transept and porch. Generally of sandstone masonry, but limestone in the porch. The colours and textures of these local stones are very similar. Some of the masonry appears to survive from the medieval church. The nave is built in random rubble, the tower in coursed rubble. All window and door dressings are in a light-coloured sandstone ashlar which in most places is slightly proud of the wall plane. Slate roofs with crested ridge tiles of red colour. Sandstone parapets to all the gables, with finials and carved kneelers.
The tower stands over the W gable of the nave above a corbel table. It has a crenellated and corbelled parapet. The spire has been lost, but its corbelled base at the top of the tower is visible internally. The external entrance to the bellringers' chamber at the N side is reached by unusual stone stairs above the nave roof. The belfry has large single lancets facing N, W and S, and a pair of lancets facing E towards the village.
A stone with a large socket for a preaching cross lies close to the S porch.

The E window is one of the best details of the C19 restoration with a deep trefoiled rear arch and a cluster of three marble scoinson colonettes at each side. There is a carved reredos and patterned tile paving in the chancel. Grey limestone columns in the arcade at the N of the chancel carry limestone arches of a cream colour. The arcade at the N of the nave is in similar style but with the columns in a sandstone of a more purpose colour.

A low recess in the nave wall near the porch is the only surviving early feature of the interior. Over it is a double arch supported on a central corbel. In the C19 reorganisation the W end of the nave was set apart as a Baptistry, with patterned tiles of high colour, some glazed and some encaustic, on the walls and floor. It has a C19 font carved in the Norman style but with the bowl, shaft and pedestal all in contrasting stone types and colours.

The older memorials are all in the S transept, which is known as the Paskeston Chapel or the Lady Chapel. These early memorials are all to the Roch family of Paskeston, the major landowners of Cosheston. The earliest is one to Michael Roch who died in 1748. The rood and the screen to the Paskeston chapel were carved by J Matthias, c.1925.

Listed for the special interest of its medieval origins from which the church derives its form, including an unusual tower. Its C19 interior is richly and consistently detailed.