A Grade I Listed Building in Cosheston, Pembrokeshire 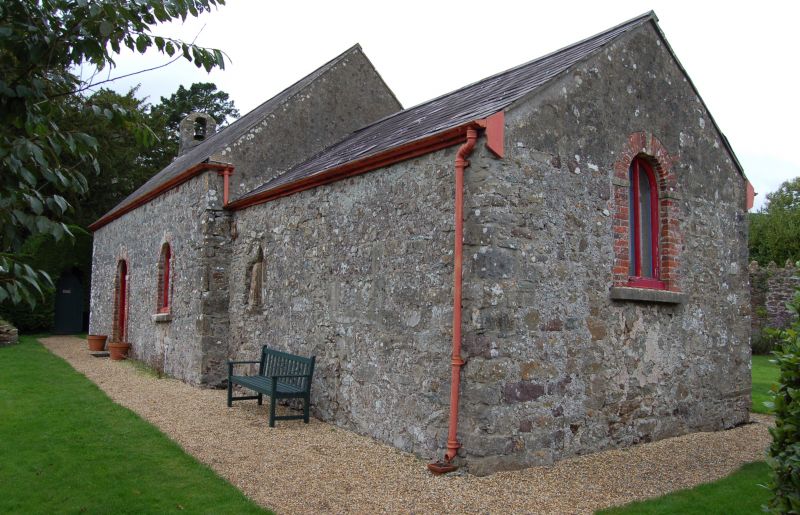 Location: A small chapel in close proximity to Upton Castle. It is reached by a private path from the Castle.

C12 or C13, dedicated to St Giles. It is the only church in the parish of Upton, and is essentially the private chapel of the Castle. Fenton (1810) considered that the castle buildings originally extended to the chapel. Upton parish is traditionally connected with the parish of Nash: the owner of Upton Castle was the patron of Nash, and before the Reformation the Rector of Nash also lived in the Patron's household. The chapel as described in 1722 as a chapel-of-ease of Nash Parish.

The S door and the windows of the chapel were probably restored in the late C18. The height of the nave also appears to have been increased by about 1 m. Fenton refers to 'modern windows and a common slated roof. After a period of disuse the chapel was internally restored (1978) by the present owners of Upton Castle, and it has a new floor and new communion rails.

The nave is in coursed rubble masonry of local stone, the chancel is in random rubble at 2 m height the character of the masonry of the S wall of the nave changes. The roofs are slated and have tile ridges. There is a bellcote over the W gable. The door and window openings are found headed, with arches of handmade brick but stone imposts and keystones. At the N side of the nave there is a blocked door and in the S wall of the chancel a blocked trefoil-headed window.

A small chancel 4.8 m by 3.2 m, and a small nave 8 m by 4.2 m, linked by a round-headed plain chancel arch. The roofs have lapped and pegged collar-beams with a slight camber. There is a plain piscina in the chancel. The Jacobean pulpit is believed to have come from Haverfordwest in the 1840s.

Two sepulchral monuments are recessed into the N wall of the chancel, one possibly that of a priest, beneath a simple canopy, and one of a female member of the Malefant family, under an ogee canopy with finials. A C13 mailed effigy brought from Nash church lies against the opposite wall. The effigy of William Malefant, d.1362, in chain-mail is recessed into the N wall of the nave. This has an ogee canopy in light-yellow sandstone richly carved, with tall sides on which are miniature carved figures, and a cornice.

There are tablets to members of the Bowen, Tasker, Evans and Neale families, including John Tasker of Upton Castle and Bombay, d.1800 (by William Williams, mason, of St Florence). A unique candle-holder in the form of a fist is in the NE corner of the nave. There is a fine Norman font with an arch and two half-arches on each face, a plain pillar and a circular foot worked on a square base.

Listed grade I as an unusual example of a Georgian restoration of an early medieval chapel, preserving many important effigy monuments.